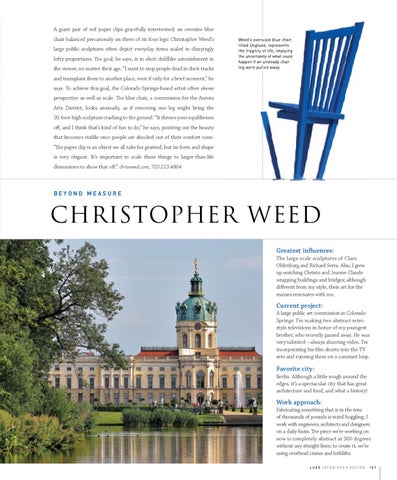 A giant pair of red paper clips gracefully intertwined; an oversize blue chair balanced precariously on three of its four legs: Christopher Weed’s large public sculptures often depict everyday items scaled to dizzyingly lofty proportions. The goal, he says, is to elicit childlike astonishment in the viewer, no matter their age. “I want to stop people dead in their tracks

Weed’s overscale blue chair, titled Unglued, represents the fragility of life, implying the uncertainty of what could happen if an unsteady chair leg were pulled away.

and transplant them to another place, even if only for a brief moment,” he says. To achieve this goal, the Colorado Springs-based artist often skews perspective as well as scale. The blue chair, a commission for the Aurora Arts District, looks unsteady, as if removing one leg might bring the 20-foot-high sculpture crashing to the ground. “It throws your equilibrium off, and I think that’s kind of fun to do,” he says, pointing out the beauty that becomes visible once people are shocked out of their comfort zone. “The paper clip is an object we all take for granted, but its form and shape is very elegant. It’s important to scale these things to larger-than-life dimensions to show that off.” chrisweed.com; 720.213.4864

CHRISTOPHER WEED Greatest influences: The large-scale sculptures of Claes Oldenburg and Richard Serra. Also, I grew up watching Christo and Jeanne-Claude wrapping buildings and bridges; although different from my style, their art for the masses resonates with me.

Current project: A large public art commission in Colorado Springs. I’m making two abstract retrostyle televisions in honor of my youngest brother, who recently passed away. He was very talented—always shooting video. I’m incorporating his film shorts into the TV sets and running them on a constant loop.

Favorite city: Berlin. Although a little rough around the edges, it’s a spectacular city that has great architecture and food, and what a history!

Work approach: Fabricating something that is in the tens of thousands of pounds is mind-boggling; I work with engineers, architects and designers on a daily basis. The piece we’re working on now is completely abstract at 360 degrees without any straight lines; to create it, we’re using overhead cranes and forklifts. LUXE INTERIORS