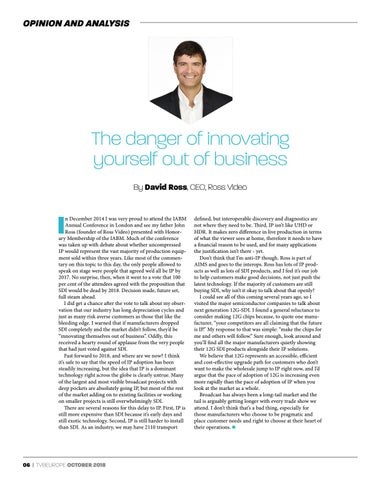 The danger of innovating yourself out of business By David Ross, CEO, Ross Video

n December 2014 I was very proud to attend the IABM Annual Conference in London and see my father John Ross (founder of Ross Video) presented with Honorary Membership of the IABM. Much of the conference was taken up with debate about whether uncompressed IP would represent the vast majority of production equipment sold within three years. Like most of the commentary on this topic to this day, the only people allowed to speak on stage were people that agreed we’d all be IP by 2017. No surprise, then, when it went to a vote that 100 per cent of the attendees agreed with the proposition that SDI would be dead by 2018. Decision made, future set, full steam ahead. I did get a chance after the vote to talk about my observation that our industry has long depreciation cycles and just as many risk averse customers as those that like the bleeding edge. I warned that if manufacturers dropped SDI completely and the market didn’t follow, they’d be “innovating themselves out of business”. Oddly, this received a hearty round of applause from the very people that had just voted against SDI. Fast forward to 2018, and where are we now? I think it’s safe to say that the speed of IP adoption has been steadily increasing, but the idea that IP is a dominant technology right across the globe is clearly untrue. Many of the largest and most visible broadcast projects with deep pockets are absolutely going IP, but most of the rest of the market adding on to existing facilities or working on smaller projects is still overwhelmingly SDI. There are several reasons for this delay to IP. First, IP is still more expensive than SDI because it’s early days and still exotic technology. Second, IP is still harder to install than SDI. As an industry, we may have 2110 transport

defined, but interoperable discovery and diagnostics are not where they need to be. Third, IP isn’t like UHD or HDR. It makes zero difference in live production in terms of what the viewer sees at home, therefore it needs to have a financial reason to be used, and for many applications the justification isn’t there - yet. Don’t think that I’m anti-IP though. Ross is part of AIMS and goes to the interops. Ross has lots of IP products as well as lots of SDI products, and I feel it’s our job to help customers make good decisions, not just push the latest technology. If the majority of customers are still buying SDI, why isn’t it okay to talk about that openly? I could see all of this coming several years ago, so I visited the major semiconductor companies to talk about next generation 12G-SDI. I found a general reluctance to consider making 12G chips because, to quote one manufacturer, “your competitors are all claiming that the future is IP.” My response to that was simple: “make the chips for me and others will follow.” Sure enough, look around and you’ll find all the major manufacturers quietly showing their 12G SDI products alongside their IP solutions. We believe that 12G represents an accessible, efficient and cost-effective upgrade path for customers who don’t want to make the wholesale jump to IP right now, and I’d argue that the pace of adoption of 12G is increasing even more rapidly than the pace of adoption of IP when you look at the market as a whole. Broadcast has always been a long-tail market and the tail is arguably getting longer with every trade show we attend. I don’t think that’s a bad thing, especially for those manufacturers who choose to be pragmatic and place customer needs and right to choose at their heart of their operations. n