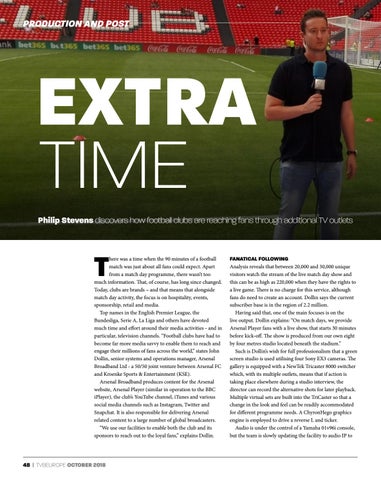 here was a time when the 90 minutes of a football match was just about all fans could expect. Apart from a match day programme, there wasn’t too much information. That, of course, has long since changed. Today, clubs are brands – and that means that alongside match day activity, the focus is on hospitality, events, sponsorship, retail and media. Top names in the English Premier League, the Bundesliga, Serie A, La Liga and others have devoted much time and effort around their media activities - and in particular, television channels. “Football clubs have had to become far more media savvy to enable them to reach and engage their millions of fans across the world,” states John Dollin, senior systems and operations manager, Arsenal Broadband Ltd - a 50/50 joint venture between Arsenal FC and Kroenke Sports & Entertainment (KSE). Arsenal Broadband produces content for the Arsenal website, Arsenal Player (similar in operation to the BBC iPlayer), the club’s YouTube channel, iTunes and various social media channels such as Instagram, Twitter and Snapchat. It is also responsible for delivering Arsenal related content to a large number of global broadcasters. “We use our facilities to enable both the club and its sponsors to reach out to the loyal fans,” explains Dollin.

FANATICAL FOLLOWING Analysis reveals that between 20,000 and 30,000 unique visitors watch the stream of the live match day show and this can be as high as 220,000 when they have the rights to a live game. There is no charge for this service, although fans do need to create an account. Dollin says the current subscriber base is in the region of 2.2 million. Having said that, one of the main focuses is on the live output. Dollin explains: “On match days, we provide Arsenal Player fans with a live show, that starts 30 minutes before kick-off. The show is produced from our own eight by four metres studio located beneath the stadium.” Such is Dollin’s wish for full professionalism that a green screen studio is used utilising four Sony EX3 cameras. The gallery is equipped with a NewTek Tricaster 8000 switcher which, with its multiple outlets, means that if action is taking place elsewhere during a studio interview, the director can record the alternative shots for later playback. Multiple virtual sets are built into the TriCaster so that a change in the look and feel can be readily accommodated for different programme needs. A ChyronHego graphics engine is employed to drive a reverse L and ticker. Audio is under the control of a Yamaha 01v96i console, but the team is slowly updating the facility to audio IP to