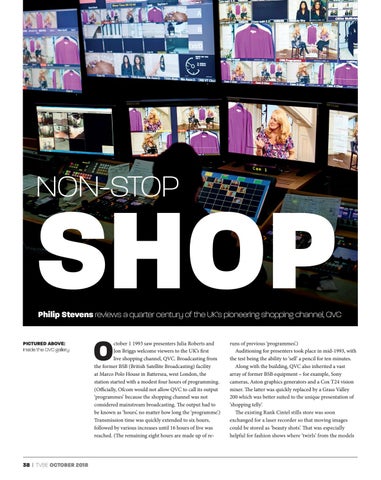 PICTURED ABOVE: Inside the QVC gallery

ctober 1 1993 saw presenters Julia Roberts and Jon Briggs welcome viewers to the UK’s first live shopping channel, QVC. Broadcasting from the former BSB (British Satellite Broadcasting) facility at Marco Polo House in Battersea, west London, the station started with a modest four hours of programming. (Oﬃcially, Ofcom would not allow QVC to call its output ‘programmes’ because the shopping channel was not considered mainstream broadcasting. The output had to be known as ‘hours’, no matter how long the ‘programme’.) Transmission time was quickly extended to six hours, followed by various increases until 16 hours of live was reached. (The remaining eight hours are made up of re-

runs of previous ‘programmes’.) Auditioning for presenters took place in mid-1993, with the test being the ability to ‘sell’ a pencil for ten minutes. Along with the building, QVC also inherited a vast array of former BSB equipment – for example, Sony cameras, Aston graphics generators and a Cox T24 vision mixer. The latter was quickly replaced by a Grass Valley 200 which was better suited to the unique presentation of ‘shopping telly’. The existing Rank Cintel stills store was soon exchanged for a laser recorder so that moving images could be stored as ‘beauty shots’. That was especially helpful for fashion shows where ‘twirls’ from the models