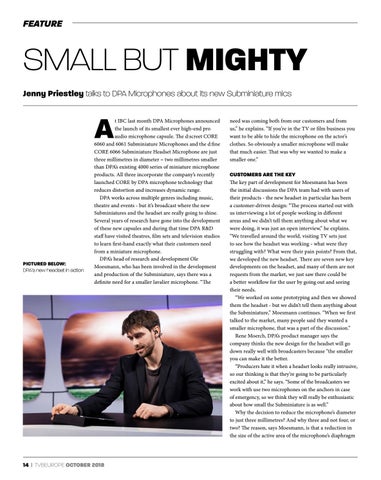 t IBC last month DPA Microphones announced the launch of its smallest ever high-end pro audio microphone capsule. The d:screet CORE 6060 and 6061 Subminiature Microphones and the d:fine CORE 6066 Subminiature Headset Microphone are just three millimetres in diameter – two millimetres smaller than DPA’s existing 4000 series of miniature microphone products. All three incorporate the company’s recently launched CORE by DPA microphone technology that reduces distortion and increases dynamic range. DPA works across multiple genres including music, theatre and events - but it’s broadcast where the new Subminiatures and the headset are really going to shine. Several years of research have gone into the development of these new capsules and during that time DPA R&D staff have visited theatres, film sets and television studios to learn first-hand exactly what their customers need from a miniature microphone. DPA’s head of research and development Ole Moesmann, who has been involved in the development and production of the Subminiature, says there was a definite need for a smaller lavalier microphone. “The

need was coming both from our customers and from us,” he explains. “If you’re in the TV or film business you want to be able to hide the microphone on the actor’s clothes. So obviously a smaller microphone will make that much easier. That was why we wanted to make a smaller one.” CUSTOMERS ARE THE KEY The key part of development for Moesmann has been the initial discussions the DPA team had with users of their products - the new headset in particular has been a customer-driven design: “The process started out with us interviewing a lot of people working in different areas and we didn’t tell them anything about what we were doing, it was just an open interview,” he explains. “We travelled around the world, visiting TV sets just to see how the headset was working - what were they struggling with? What were their pain points? From that, we developed the new headset. There are seven new key developments on the headset, and many of them are not requests from the market, we just saw there could be a better workflow for the user by going out and seeing their needs. “We worked on some prototyping and then we showed them the headset - but we didn’t tell them anything about the Subminiature,” Moesmann continues. “When we first talked to the market, many people said they wanted a smaller microphone, that was a part of the discussion.” Rene Moerch, DPA’s product manager says the company thinks the new design for the headset will go down really well with broadcasters because “the smaller you can make it the better. “Producers hate it when a headset looks really intrusive, so our thinking is that they’re going to be particularly excited about it,” he says. “Some of the broadcasters we work with use two microphones on the anchors in case of emergency, so we think they will really be enthusiastic about how small the Subminiature is as well.” Why the decision to reduce the microphone’s diameter to just three millimetres? And why three and not four, or two? The reason, says Moesmann, is that a reduction in the size of the active area of the microphone’s diaphragm