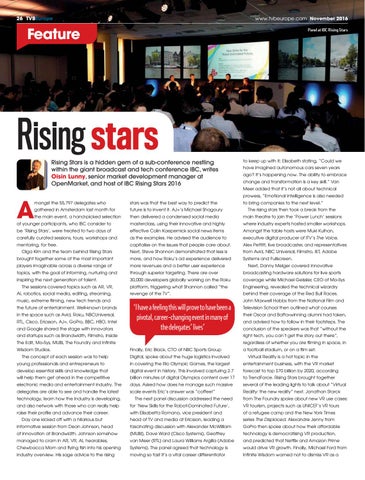 to keep up with it; Elisabeth stating, “Could we have imagined autonomous cars seven years ago? It’s happening now. The ability to embrace change and transformation is a key skill.” Van Meer added that it’s not all about technical prowess, “Emotional intelligence is also needed

stars was that the best way to predict the

gathered in Amsterdam last month for

future is to invent it. AJ+’s Michael Shagoury

the main event, a hand-picked selection

then delivered a condensed social media

of younger participants, who IBC consider to

masterclass, using their innovative and highly

be ‘Rising Stars’, were treated to two days of

Amongst the table hosts were Muki Kulhan,

as the examples. He advised the audience to

capitalise on the issues that people care about.

Next, Steve Shannon demonstrated that less is

brought together some of the most important

players imaginable across a diverse range of

topics, with the goal of informing, nurturing and

through superior targeting. There are over

inspiring the next generation of talent.

30,000 developers globally working on the Roku

platform, triggering what Shannon called “the

revenge of the TV”.

behind their coverage of the Red Bull Races.

Olga Kim and the team behind Rising Stars

Television School then outlined what courses their Oscar and Bafta-winning alumni had taken, and advised how to follow in their footsteps. The conclusion of the speakers was that “without the right tech, you can’t get the story out there”, regardless of whether you are ﬁlming in space, in

The Edit, Mo-Sys, MUBI, The Foundry and Inﬁnite The concept of each session was to help

The rising stars then took a break from the

John Maxwell Hobbs from the National Film and

‘I have a feeling this will prove to have been a pivotal, career-changing event in many of the delegates’ lives’

and startups such as Brandwidth, Filmstro, Inside Wisdom Studios.

to bring companies to the next level.”

a football stadium, or on a ﬁlm set. Virtual Reality is a hot topic in the

young professionals and entrepreneurs to

in covering the Rio Olympic Games, the largest

entertainment business, with the VR market

develop essential skills and knowledge that

will help them get ahead in the competitive

to TrendForce. Rising Stars brought together

electronic media and entertainment industry. The

days. Asked how does he manage such massive

several of the leading lights to talk about “Virtual

delegates are able to see and handle the latest

technology, learn how the industry is developing,

The next panel discussion addressed the need

from The Foundry spoke about new VR use cases:

and also network with those who can really help

for ‘New Skills for the Robot-Dominated Future’,

raise their proﬁle and advance their career.

with Elisabetta Romano, vice president and

of a refugee camp and the New York Times

Day one kicked off with a hilarious but

head of TV and media at Ericsson, leading a

series The Displaced. Alexandre Jenny from

GoPro then spoke about how their affordable

of innovation at Brandwidth. Johnson somehow

and predicted that Netﬂix and Amazon Prime

Chewbacca Mom and ﬂying ﬁsh into his opening

Systems). The panel agreed that technology is

industry overview. His sage advice to the rising

Inﬁnite Wisdom warned not to dismiss VR as a