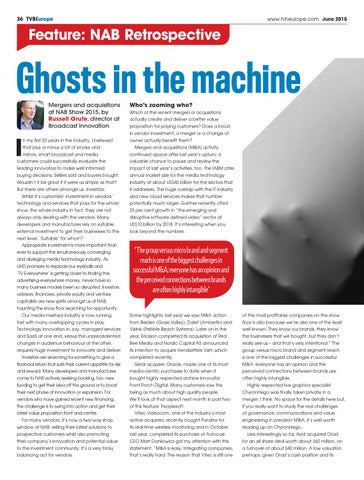 Ghosts in the machine Mergers and acquisitions at NAB Show 2015, by Russell Grute, director at Broadcast Innovation

Who’s zooming who? Which of the recent mergers or acquisitions actually create and deliver a better value proposition for paying customers? Does a boost in vendor investment, a merger or a change of

n my ﬁrst 20 years in the industry, I believed

that plus or minus a bit of smoke and

customers could successfully evaluate the

valuable chance to pause and review the

impact of last year’s activities, too. The IABM cites

Wouldn’t it be great if it were as simple as that?

industry at about US$40 billion for the sectors that

But there are others amongst us. Investors.

it addresses. The huge overlap with the IT industry

Whilst it’s customers’ investment in vendors’

technology and services that pays for the whole

show, the whole industry in fact, they are not

25 per cent growth in “the emerging and

always only dealing with the vendors. Many

developers and manufactures rely on suitable

external investment to get their businesses to the

look beyond the numbers.

next level. ‘Suitable’ for whom? Appropriate investment is more important than ever to support the simultaneously converging and diverging media technology industry. As UHD promises to explode our eyeballs and ‘TV Everywhere’ is getting closer to ﬁnding the advertising-everywhere money, never have so many business models been so disrupted. Investors, advisors, ﬁnanciers, private equity and venture

‘The group versus micro brand and segment reach is one of the biggest challenges in successful M&amp;A; everyone has an opinion and the perceived connections between brands are often highly intangible’

capitalists are new spirits amongst us at NAB, haunting the show ﬂoor searching for opportunity. Some highlights: last year we saw M&amp;A action

of the most proﬁtable companies on the show

fast with many overlapping cycles in play.

ﬂoor is also because we’re also one of the least

Vislink (Pebble Beach Systems). Later on in the

well known. They know our brands, they know

and SaaS at one end, versus the unprecedented

the businesses that we bought, but they don’t

changes in audience behaviour at the other,

really see us – and that’s very intentional.” The

its intention to acquire trendsetters Vizrt, which

is one of the biggest challenges in successful

Our media-meshed industry is now running

Serial acquirer, Oracle, made one of its most

M&amp;A; everyone has an opinion and the

and reward. Many developers and manufactures

media-centric purchases to date when it

perceived connections between brands are

funding to get their idea off the ground or to boost

their next phase of innovation or expansion. For

being as much about high quality people.

ChyronHego was ﬁnally taken private in a

We’ll look at that aspect next month in part two

merger: I think. No space for the details here but,

the challenge is to swing into action and get their

of this feature: Peoplesoft.

if you really want to study the real challenges

Vitec Videocom, one of the industry’s most

of governance, communications and value

window at NAB: selling their latest solutions to

its real-time wireless monitoring and in October

reading up on ChyronHego.

their company’s innovation and potential value

CEO Matt Danilowicz got my attention with this

for an all share deal worth about $60 million, on

to the investment community. It’s a very tricky

a turnover of about $40 million. A low valuation

that’s really hard. The reason that Vitec is still one

perhaps, given Orad’s cash position and its

Business, insight and intelligence for the media and entertainment industry