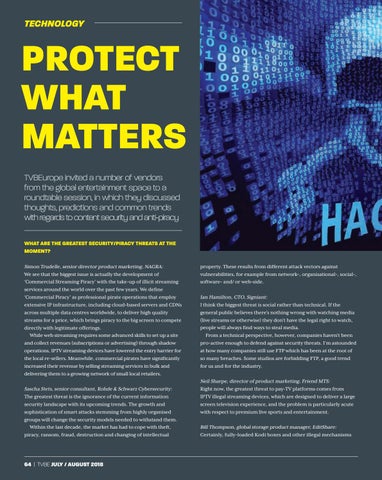 PROTECT WHAT MATTERS TVBEurope invited a number of vendors from the global entertainment space to a roundtable session, in which they discussed thoughts, predictions and common trends with regards to content security and anti-piracy WHAT ARE THE GREATEST SECURITY/PIRACY THREATS AT THE MOMENT?

Simon Trudelle, senior director product marketing, NAGRA: We see that the biggest issue is actually the development of ‘Commercial Streaming Piracy’ with the take-up of illicit streaming services around the world over the past few years. We define ‘Commercial Piracy’ as professional pirate operations that employ extensive IP infrastructure, including cloud-based servers and CDNs across multiple data centres worldwide, to deliver high quality streams for a price, which brings piracy to the big screen to compete directly with legitimate offerings. While web streaming requires some advanced skills to set up a site and collect revenues (subscriptions or advertising) through shadow operations, IPTV streaming devices have lowered the entry barrier for the local re-sellers. Meanwhile, commercial pirates have significantly increased their revenue by selling streaming services in bulk and delivering them to a growing network of small local retailers. Sascha Stets, senior consultant, Rohde & Schwarz Cybersecurity: The greatest threat is the ignorance of the current information security landscape with its upcoming trends. The growth and sophistication of smart attacks stemming from highly organised groups will change the security models needed to withstand them. Within the last decade, the market has had to cope with theft, piracy, ransom, fraud, destruction and changing of intellectual

property. These results from different attack vectors against vulnerabilities, for example from network-, organisational-, social-, software- and/ or web-side.

Ian Hamilton, CTO, Signiant: I think the biggest threat is social rather than technical. If the general public believes there’s nothing wrong with watching media (live streams or otherwise) they don’t have the legal right to watch, people will always find ways to steal media. From a technical perspective, however, companies haven’t been pro-active enough to defend against security threats. I’m astounded at how many companies still use FTP which has been at the root of so many breaches. Some studios are forbidding FTP, a good trend for us and for the industry. Neil Sharpe, director of product marketing, Friend MTS: Right now, the greatest threat to pay-TV platforms comes from IPTV illegal streaming devices, which are designed to deliver a large screen television experience, and the problem is particularly acute with respect to premium live sports and entertainment. Bill Thompson, global storage product manager, EditShare: Certainly, fully-loaded Kodi boxes and other illegal mechanisms