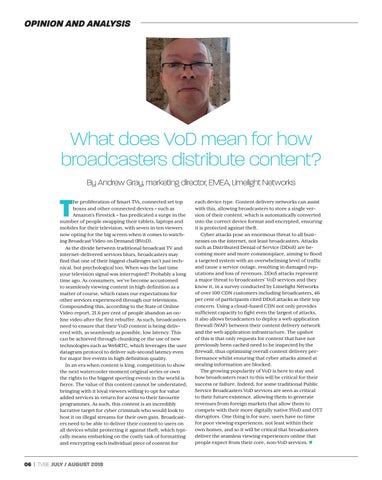 he proliferation of Smart TVs, connected set top boxes and other connected devices – such as Amazon’s Firestick – has predicated a surge in the number of people swapping their tablets, laptops and mobiles for their television, with seven in ten viewers now opting for the big screen when it comes to watching Broadcast Video on Demand (BVoD). As the divide between traditional broadcast TV and internet-delivered services blurs, broadcasters may find that one of their biggest challenges isn’t just technical, but psychological too. When was the last time your television signal was interrupted? Probably a long time ago. As consumers, we’ve become accustomed to seamlessly viewing content in high definition as a matter of course, which raises our expectations for other services experienced through our televisions. Compounding this, according to the State of Online Video report, 21.6 per cent of people abandon an online video after the first rebuffer. As such, broadcasters need to ensure that their VoD content is being delivered with, as seamlessly as possible, low latency. This can be achieved through chunking or the use of new technologies such as WebRTC, which leverages the user datagram protocol to deliver sub-second latency even for major live events in high definition quality. In an era when content is king, competition to show the next watercooler moment original series or own the rights to the biggest sporting events in the world is fierce. The value of this content cannot be understated, bringing with it loyal viewers willing to opt for value added services in return for access to their favourite programmes. As such, this content is an incredibly lucrative target for cyber criminals who would look to host it on illegal streams for their own gain. Broadcasters need to be able to deliver their content to users on all devices whilst protecting it against theft, which typically means embarking on the costly task of formatting and encrypting each individual piece of content for

each device type. Content delivery networks can assist with this, allowing broadcasters to store a single version of their content, which is automatically converted into the correct device format and encrypted, ensuring it is protected against theft. Cyber attacks pose an enormous threat to all businesses on the internet, not least broadcasters. Attacks such as Distributed Denial of Service (DDoS) are becoming more and more commonplace, aiming to flood a targeted system with an overwhelming level of traffic and cause a service outage, resulting in damaged reputations and loss of revenues. DDoS attacks represent a major threat to broadcasters’ VoD services and they know it, in a survey conducted by Limelight Networks of over 100 CDN customers including broadcasters, 46 per cent of participants cited DDoS attacks as their top concern. Using a cloud-based CDN not only provides sufficient capacity to fight even the largest of attacks, it also allows broadcasters to deploy a web application firewall (WAF) between their content delivery network and the web application infrastructure. The upshot of this is that only requests for content that have not previously been cached need to be inspected by the firewall, thus optimising overall content delivery performance whilst ensuring that cyber attacks aimed at stealing information are blocked. The growing popularity of VoD is here to stay and how broadcasters react to this will be critical for their success or failure. Indeed, for some traditional Public Service Broadcasters VoD services are seen as critical to their future existence, allowing them to generate revenues from foreign markets that allow them to compete with their more digitally native SVoD and OTT disruptors. One thing is for sure, users have no time for poor viewing experiences, not least within their own homes, and so it will be critical that broadcasters deliver the seamless viewing experiences online that people expect from their core, non-VoD services. n