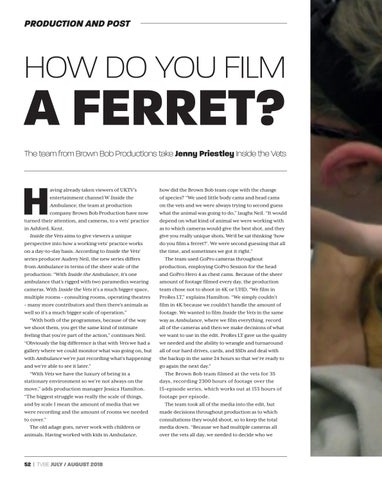 HOW DO YOU FILM

A FERRET? The team from Brown Bob Productions take Jenny Priestley Inside the Vets

aving already taken viewers of UKTV’s entertainment channel W Inside the Ambulance, the team at production company Brown Bob Production have now turned their attention, and cameras, to a vets’ practice in Ashford, Kent. Inside the Vets aims to give viewers a unique perspective into how a working vets’ practice works on a day-to-day basis. According to Inside the Vets’ series producer Audrey Neil, the new series differs from Ambulance in terms of the sheer scale of the production: “With Inside the Ambulance, it’s one ambulance that’s rigged with two paramedics wearing cameras. With Inside the Vets it’s a much bigger space, multiple rooms - consulting rooms, operating theatres - many more contributors and then there’s animals as well so it’s a much bigger scale of operation.” “With both of the programmes, because of the way we shoot them, you get the same kind of intimate feeling that you’re part of the action,” continues Neil. “Obviously the big difference is that with Vets we had a gallery where we could monitor what was going on, but with Ambulance we’re just recording what’s happening and we’re able to see it later.” “With Vets we have the luxury of being in a stationary environment so we’re not always on the move,” adds production manager Jessica Hamilton. “The biggest struggle was really the scale of things, and by scale I mean the amount of media that we were recording and the amount of rooms we needed to cover.” The old adage goes, never work with children or animals. Having worked with kids in Ambulance,

how did the Brown Bob team cope with the change of species? “We used little body cams and head cams on the vets and we were always trying to second guess what the animal was going to do,” laughs Neil. “It would depend on what kind of animal we were working with as to which cameras would give the best shot, and they give you really unique shots. We’d be sat thinking ‘how do you film a ferret?’. We were second guessing that all the time, and sometimes we got it right.” The team used GoPro cameras throughout production, employing GoPro Session for the head and GoPro Hero 4 as chest cams. Because of the sheer amount of footage filmed every day, the production team chose not to shoot in 4K or UHD, “We film in ProRes LT,” explains Hamilton. “We simply couldn’t film in 4K because we couldn’t handle the amount of footage. We wanted to film Inside the Vets in the same way as Ambulance, where we film everything, record all of the cameras and then we make decisions of what we want to use in the edit. ProRes LT gave us the quality we needed and the ability to wrangle and turnaround all of our hard drives, cards, and SSDs and deal with the backup in the same 24 hours so that we’re ready to go again the next day.” The Brown Bob team filmed at the vets for 35 days, recording 2300 hours of footage over the 15-episode series, which works out at 153 hours of footage per episode. The team took all of the media into the edit, but made decisions throughout production as to which consultations they would shoot, so to keep the total media down. “Because we had multiple cameras all over the vets all day, we needed to decide who we