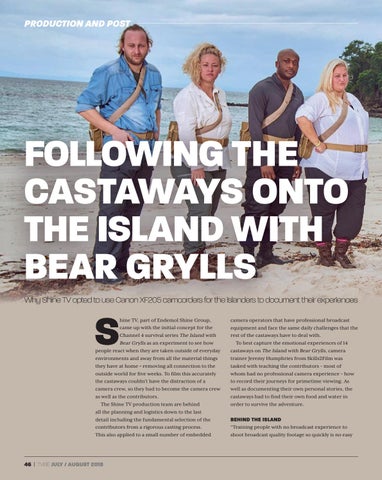 hine TV, part of Endemol Shine Group, came up with the initial concept for the Channel 4 survival series The Island with Bear Grylls as an experiment to see how people react when they are taken outside of everyday environments and away from all the material things they have at home – removing all connection to the outside world for five weeks. To film this accurately the castaways couldn’t have the distraction of a camera crew, so they had to become the camera crew as well as the contributors. The Shine TV production team are behind all the planning and logistics down to the last detail including the fundamental selection of the contributors from a rigorous casting process. This also applied to a small number of embedded

camera operators that have professional broadcast equipment and face the same daily challenges that the rest of the castaways have to deal with. To best capture the emotional experiences of 14 castaways on The Island with Bear Grylls, camera trainer Jeremy Humphries from Skills2Film was tasked with teaching the contributors - most of whom had no professional camera experience - how to record their journeys for primetime viewing. As well as documenting their own personal stories, the castaways had to find their own food and water in order to survive the adventure. BEHIND THE ISLAND “Training people with no broadcast experience to shoot broadcast quality footage so quickly is no easy