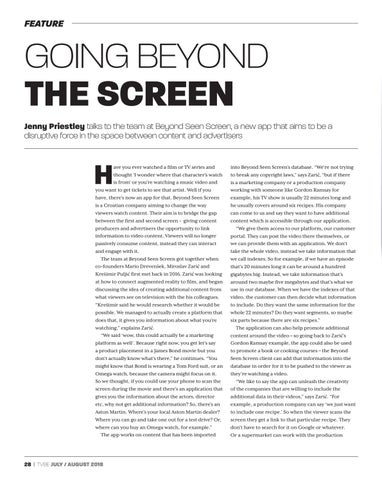 GOING BEYOND THE SCREEN Jenny Priestley talks to the team at Beyond Seen Screen, a new app that aims to be a disruptive force in the space between content and advertisers

ave you ever watched a film or TV series and thought ‘I wonder where that character’s watch is from’ or you’re watching a music video and you want to get tickets to see that artist. Well if you have, there’s now an app for that. Beyond Seen Screen is a Croatian company aiming to change the way viewers watch content. Their aim is to bridge the gap between the first and second screen - giving content producers and advertisers the opportunity to link information to video content. Viewers will no longer passively consume content, instead they can interact and engage with it. The team at Beyond Seen Screen got together when co-founders Mario Drevenšek, Miroslav Zarić and Krešimir Puljić first met back in 2016. Zarić was looking at how to connect augmented reality to film, and began discussing the idea of creating additional content from what viewers see on television with the his colleagues. “Krešimir said he would research whether it would be possible. We managed to actually create a platform that does that, it gives you information about what you’re watching,” explains Zarić. “We said ‘wow, this could actually be a marketing platform as well’. Because right now, you get let’s say a product placement in a James Bond movie but you don’t actually know what’s there,” he continues. “You might know that Bond is wearing a Tom Ford suit, or an Omega watch, because the camera might focus on it. So we thought, if you could use your phone to scan the screen during the movie and there’s an application that gives you the information about the actors, director etc, why not get additional information? So, there’s an Aston Martin. Where’s your local Aston Martin dealer? Where you can go and take one out for a test drive? Or, where can you buy an Omega watch, for example.” The app works on content that has been imported

into Beyond Seen Screen’s database. “We’re not trying to break any copyright laws,” says Zarić, “but if there is a marketing company or a production company working with someone like Gordon Ramsay for example, his TV show is usually 22 minutes long and he usually covers around six recipes. His company can come to us and say they want to have additional content which is accessible through our application. “We give them access to our platform, our customer portal. They can post the video there themselves, or we can provide them with an application. We don’t take the whole video, instead we take information that we call indexes. So for example, if we have an episode that’s 20 minutes long it can be around a hundred gigabytes big. Instead, we take information that’s around two maybe five megabytes and that’s what we use in our database. When we have the indexes of that video, the customer can then decide what information to include. Do they want the same information for the whole 22 minutes? Do they want segments, so maybe six parts because there are six recipes.” The application can also help promote additional content around the video – so going back to Zarić’s Gordon Ramsay example, the app could also be used to promote a book or cooking courses – the Beyond Seen Screen client can add that information into the database in order for it to be pushed to the viewer as they’re watching a video. “We like to say the app can unleash the creativity of the companies that are willing to include the additional data in their videos,” says Zarić. “For example, a production company can say ‘we just want to include one recipe.’ So when the viewer scans the screen they get a link to that particular recipe. They don’t have to search for it on Google or whatever. Or a supermarket can work with the production