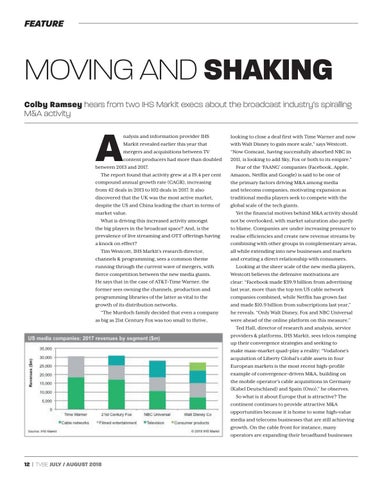 nalysis and information provider IHS Markit revealed earlier this year that mergers and acquisitions between TV content producers had more than doubled between 2013 and 2017. The report found that activity grew at a 19.4 per cent compound annual growth rate (CAGR), increasing from 42 deals in 2013 to 102 deals in 2017. It also discovered that the UK was the most active market, despite the US and China leading the chart in terms of market value. What is driving this increased activity amongst the big players in the broadcast space? And, is the prevalence of live streaming and OTT offerings having a knock on effect? Tim Westcott, IHS Markit’s research director, channels & programming, sees a common theme running through the current wave of mergers, with fierce competition between the new media giants. He says that in the case of AT&T-Time Warner, the former sees owning the channels, production and programming libraries of the latter as vital to the growth of its distribution networks. “The Murdoch family decided that even a company as big as 21st Century Fox was too small to thrive,

looking to close a deal first with Time Warner and now with Walt Disney to gain more scale,” says Westcott. “Now Comcast, having successfully absorbed NBC in 2011, is looking to add Sky, Fox or both to its empire.” Fear of the ‘FAANG’ companies (Facebook, Apple, Amazon, Netflix and Google) is said to be one of the primary factors driving M&A among media and telecoms companies, motivating expansion as traditional media players seek to compete with the global scale of the tech giants. Yet the financial motives behind M&A activity should not be overlooked, with market saturation also partly to blame. Companies are under increasing pressure to realise efficiencies and create new revenue streams by combining with other groups in complementary areas, all while extending into new businesses and markets and creating a direct relationship with consumers. Looking at the sheer scale of the new media players, Westcott believes the defensive motivations are clear: “Facebook made $39.9 billion from advertising last year, more than the top ten US cable network companies combined, while Netflix has grown fast and made $10.9 billion from subscriptions last year,” he reveals. “Only Walt Disney, Fox and NBC Universal were ahead of the online platform on this measure.” Ted Hall, director of research and analysis, service providers & platforms, IHS Markit, sees telcos ramping up their convergence strategies and seeking to make mass-market quad-play a reality: “Vodafone’s acquisition of Liberty Global’s cable assets in four European markets is the most recent high-profile example of convergence-driven M&A, building on the mobile operator’s cable acquisitions in Germany (Kabel Deutschland) and Spain (Ono),” he observes. So what is it about Europe that is attractive? The continent continues to provide attractive M&A opportunities because it is home to some high-value media and telecoms businesses that are still achieving growth. On the cable front for instance, many operators are expanding their broadband businesses