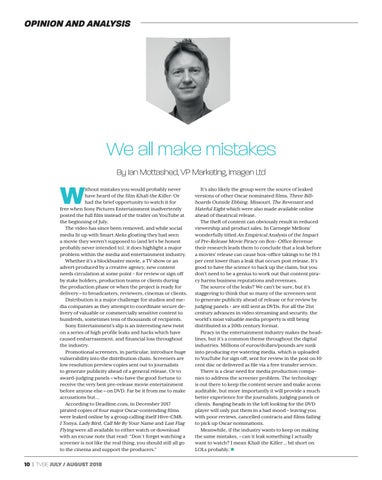 ithout mistakes you would probably never have heard of the film Khali the Killer. Or had the brief opportunity to watch it for free when Sony Pictures Entertainment inadvertently posted the full film instead of the trailer on YouTube at the beginning of July. The video has since been removed, and while social media lit up with Smart Aleks gloating they had seen a movie they weren’t supposed to (and let’s be honest probably never intended to), it does highlight a major problem within the media and entertainment industry. Whether it’s a blockbuster movie, a TV show or an advert produced by a creative agency, new content needs circulation at some point - for review or sign off by stake holders, production teams or clients during the production phase or when the project is ready for delivery – to broadcasters, reviewers, cinemas or clients. Distribution is a major challenge for studios and media companies as they attempt to coordinate secure delivery of valuable or commercially sensitive content to hundreds, sometimes tens of thousands of recipients. Sony Entertainment’s slip is an interesting new twist on a series of high profile leaks and hacks which have caused embarrassment, and financial loss throughout the industry. Promotional screeners, in particular, introduce huge vulnerability into the distribution chain. Screeners are low resolution preview copies sent out to journalists to generate publicity ahead of a general release. Or to award-judging panels – who have the good fortune to receive the very best pre-release movie entertainment before anyone else – on DVD. Far be it from me to make accusations but… According to Deadline.com, in December 2017 pirated copies of four major Oscar-contending films were leaked online by a group calling itself Hive-CM8. I Tonya, Lady Bird, Call Me By Your Name and Last Flag Flying were all available to either watch or download with an excuse note that read: “Don´t forget watching a screener is not like the real thing, you should still all go to the cinema and support the producers.”

It’s also likely the group were the source of leaked versions of other Oscar nominated films, Three Billboards Outside Ebbing, Missouri, The Revenant and Hateful Eight which were also made available online ahead of theatrical release. The theft of content can obviously result in reduced viewership and product sales. In Carnegie Mellons’ wonderfully titled An Empirical Analysis of the Impact of Pre-Release Movie Piracy on Box- Office Revenue their research leads them to conclude that a leak before a movies’ release can cause box-office takings to be 19.1 per cent lower than a leak that occurs post release. It’s good to have the science to back up the claim, but you don’t need to be a genius to work out that content piracy harms business reputations and revenues. The source of the leaks? We can’t be sure, but it’s staggering to think that so many of the screeners sent to generate publicity ahead of release or for review by judging panels - are still sent as DVDs. For all the 21st century advances in video streaming and security, the world’s most valuable media property is still being distributed in a 20th century format. Piracy in the entertainment industry makes the headlines, but it’s a common theme throughout the digital industries. Millions of euros/dollars/pounds are sunk into producing eye watering media, which is uploaded to YouTube for sign off, sent for review in the post on 10 cent disc or delivered as file via a free transfer service. There is a clear need for media production companies to address the screener problem. The technology is out there to keep the content secure and make access auditable, but more importantly it will provide a much better experience for the journalists, judging panels or clients. Banging heads in the loft looking for the DVD player will only put them in a bad mood – leaving you with poor reviews, cancelled contracts and films failing to pick up Oscar nominations. Meanwhile, if the industry wants to keep on making the same mistakes, - can it leak something I actually want to watch? I mean Khali the Killer.., bit short on LOLs probably. n