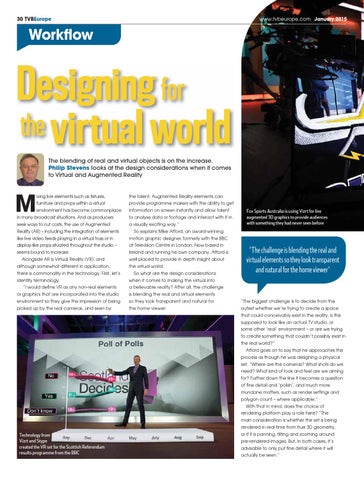 Designing for the virtual world The blending of real and virtual objects is on the increase. Philip Stevens looks at the design considerations when it comes to Virtual and Augmented Reality

ixing live elements such as ﬁxtures,

the talent. Augmented Reality elements can

furniture and props within a virtual

provide programme makers with the ability to get

in many broadcast situations. And as producers

to analyse data or footage and interact with it in

seek ways to cut costs, the use of Augmented

Reality (AR) – including the integration of elements

So explains Mike Afford, an award-winning

like live video feeds playing in a virtual truss or in

display-like props situated throughout the studio –

at Television Centre in London. Now based in

Ireland and running his own company, Afford is

Alongside AR is Virtual Reality (VR), and although somewhat different in application, there is commonality in the technology. First, let’s identify terminology. “I would deﬁne VR as any non-real elements

well placed to provide in depth insight about the virtual world. So what are the design considerations

when it comes to making the virtual into a believable reality? After all, the challenge

or graphics that are incorporated into the studio

is blending the real and virtual elements

environment so they give the impression of being

so they look transparent and natural for

“The biggest challenge is to decide from the

picked up by the real cameras, and seen by

outset whether we’re trying to create a space that could conceivably exist in the reality. Is this supposed to look like an actual TV studio, or some other ‘real’ environment – or are we trying to create something that couldn’t possibly exist in the real world?” Afford goes on to say that he approaches the process as though he was designing a physical set. “Where are the cameras? What shots do we need? What kind of look and feel are we aiming for? Further down the line it becomes a question of ﬁne detail and ‘polish’, and much more mundane matters, such as render settings and polygon count – where applicable.” With that in mind, does the choice of rendering platform play a role here? “The main consideration is whether the set is being rendered in real time from true 3D geometry,

or if it is panning, tilting and zooming around pre-rendered images. But, in both cases, it’s advisable to only put ﬁne detail where it will actually be seen.”