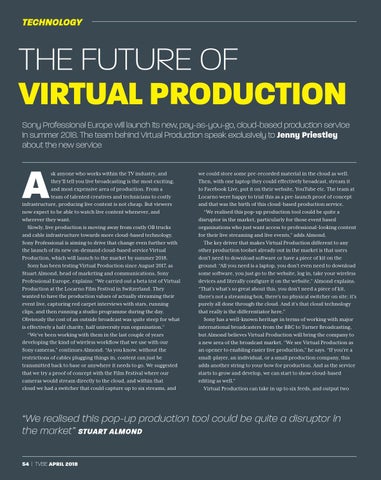 THE FUTURE OF VIRTUAL PRODUCTION Sony Professional Europe will launch its new, pay-as-you-go, cloud-based production service in summer 2018. The team behind Virtual Production speak exclusively to Jenny Priestley about the new service

sk anyone who works within the TV industry, and they’ll tell you live broadcasting is the most exciting, and most expensive area of production. From a team of talented creatives and technicians to costly infrastructure, producing live content is not cheap. But viewers now expect to be able to watch live content whenever, and wherever they want. Slowly, live production is moving away from costly OB trucks and cable infrastructure towards more cloud-based technology. Sony Professional is aiming to drive that change even further with the launch of its new on-demand cloud-based service Virtual Production, which will launch to the market by summer 2018. Sony has been testing Virtual Production since August 2017, as Stuart Almond, head of marketing and communications, Sony Professional Europe, explains: “We carried out a beta test of Virtual Production at the Locarno Film Festival in Switzerland. They wanted to have the production values of actually streaming their event live, capturing red carpet interviews with stars, running clips, and then running a studio programme during the day. Obviously the cost of an outside broadcast was quite steep for what is effectively a half charity, half university run organisation.” “We’ve been working with them in the last couple of years developing the kind of wireless workﬂow that we use with our Sony cameras,” continues Almond. “As you know, without the restrictions of cables plugging things in, content can just be transmitted back to base or anywhere it needs to go. We suggested that we try a proof of concept with the Film Festival where our cameras would stream directly to the cloud, and within that cloud we had a switcher that could capture up to six streams, and

we could store some pre-recorded material in the cloud as well. Then, with one laptop they could effectively broadcast, stream it to Facebook Live, put it on their website, YouTube etc. The team at Locarno were happy to trial this as a pre-launch proof of concept and that was the birth of this cloud-based production service. “We realised this pop-up production tool could be quite a disruptor in the market, particularly for those event based organisations who just want access to professional-looking content for their live streaming and live events,” adds Almond. The key driver that makes Virtual Production different to any other production toolset already out in the market is that users don’t need to download software or have a piece of kit on the ground: “All you need is a laptop, you don’t even need to download some software, you just go to the website, log in, take your wireless devices and literally conﬁgure it on the website,” Almond explains. “That’s what’s so great about this, you don’t need a piece of kit, there’s not a streaming box, there’s no physical switcher on site; it’s purely all done through the cloud. And it’s that cloud technology that really is the differentiator here.” Sony has a well-known heritage in terms of working with major international broadcasters from the BBC to Turner Broadcasting, but Almond believes Virtual Production will bring the company to a new area of the broadcast market. “We see Virtual Production as an opener to enabling easier live production,” he says. “If you’re a small-player, an individual, or a small production company, this adds another string to your bow for production. And as the service starts to grow and develop, we can start to show cloud-based editing as well.” Virtual Production can take in up to six feeds, and output two