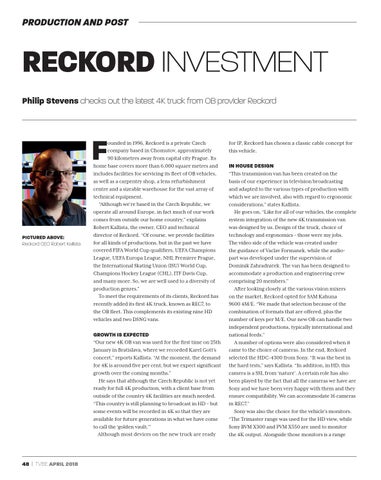 ounded in 1996, Reckord is a private Czech company based in Chomutov, approximately 90 kilometres away from capital city Prague. Its home base covers more than 6,000 square metres and includes facilities for servicing its ﬂeet of OB vehicles, as well as a carpentry shop, a lens refurbishment centre and a sizeable warehouse for the vast array of technical equipment. “Although we’re based in the Czech Republic, we operate all around Europe, in fact much of our work comes from outside our home country,” explains Robert Kallista, the owner, CEO and technical director of Reckord. “Of course, we provide facilities for all kinds of productions, but in the past we have covered FIFA World Cup qualiﬁers, UEFA Champions League, UEFA Europa League, NHL Premiere Prague, the International Skating Union (ISU) World Cup, Champions Hockey League (CHL), ITF Davis Cup, and many more. So, we are well used to a diversity of production genres.” To meet the requirements of its clients, Reckord has recently added its ﬁrst 4K truck, known as REC7, to the OB ﬂeet. This complements its existing nine HD vehicles and two DSNG vans. GROWTH IS EXPECTED “Our new 4K OB van was used for the ﬁrst time on 25th January in Bratislava, where we recorded Karel Gott’s concert,” reports Kallista. “At the moment, the demand for 4K is around ﬁve per cent, but we expect signiﬁcant growth over the coming months.” He says that although the Czech Republic is not yet ready for full 4K production, with a client base from outside of the country 4K facilities are much needed. “This country is still planning to broadcast in HD – but some events will be recorded in 4K so that they are available for future generations in what we have come to call the ‘golden vault.’” Although most devices on the new truck are ready

for IP, Reckord has chosen a classic cable concept for this vehicle. IN HOUSE DESIGN “This transmission van has been created on the basis of our experience in television broadcasting and adapted to the various types of production with which we are involved, also with regard to ergonomic considerations,” states Kallista. He goes on, “Like for all of our vehicles, the complete system integration of the new 4K transmission van was designed by us. Design of the truck, choice of technology and ergonomics – those were my jobs. The video side of the vehicle was created under the guidance of Vaclav Formanek, while the audiopart was developed under the supervision of Dominik Zahradnícek. The van has been designed to accommodate a production and engineering crew comprising 20 members.” After looking closely at the various vision mixers on the market, Reckord opted for SAM Kahuna 9600 4M/E. “We made that selection because of the combination of formats that are offered, plus the number of keys per M/E. Our new OB can handle two independent productions, typically international and national feeds.” A number of options were also considered when it came to the choice of cameras. In the end, Reckord selected the HDC-4300 from Sony. “It was the best in the hard tests,” says Kallista. “In addition, in HD, this camera is a SSL from ‘nature’. A certain role has also been played by the fact that all the cameras we have are Sony and we have been very happy with them and they ensure compatibility. We can accommodate 16 cameras in REC7.” Sony was also the choice for the vehicle’s monitors. “The Trimaster range was used for the HD view, while Sony BVM X300 and PVM X550 are used to monitor the 4K output. Alongside those monitors is a range