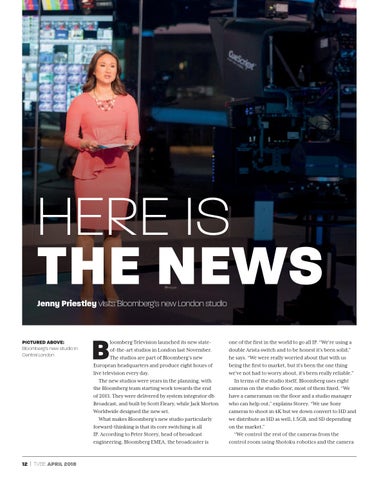 loomberg Television launched its new stateof-the-art studios in London last November. The studios are part of Bloomberg’s new European headquarters and produce eight hours of live television every day. The new studios were years in the planning, with the Bloomberg team starting work towards the end of 2013. They were delivered by system integrator db Broadcast, and built by Scott Fleary, while Jack Morton Worldwide designed the new set. What makes Bloomberg’s new studio particularly forward-thinking is that its core switching is all IP. According to Peter Storey, head of broadcast engineering, Bloomberg EMEA, the broadcaster is

one of the ﬁrst in the world to go all IP. “We’re using a double Arista switch and to be honest it’s been solid,” he says. “We were really worried about that with us being the ﬁrst to market, but it’s been the one thing we’ve not had to worry about, it’s been really reliable.” In terms of the studio itself, Bloomberg uses eight cameras on the studio ﬂoor, most of them ﬁxed. “We have a cameraman on the ﬂoor and a studio manager who can help out,” explains Storey. “We use Sony cameras to shoot in 4K but we down convert to HD and we distribute as HD as well, 1.5GB, and SD depending on the market.” “We control the rest of the cameras from the control room using Shotoku robotics and the camera