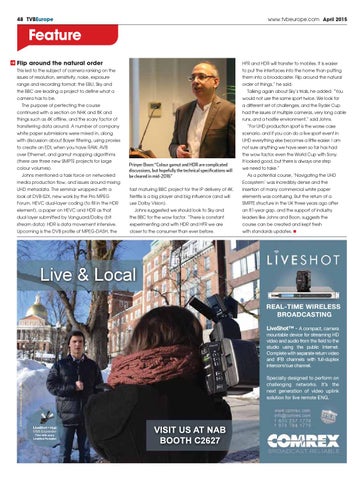 Feature Flip around the natural order

HFR and HDR will transfer to mobiles. It is easier

This led to the subject of camera ranking on the

to put the interfaces into the home than putting

them into a broadcaster. Flip around the natural

range and recording format; the EBU, Sky and

order of things,” he said.

the BBC are leading a project to deﬁne what a

Talking again about Sky’s trials, he added: “You

camera has to be.

would not use the same sport twice. We look for

The purpose of perfecting the course

a different set of challenges, and the Ryder Cup

continued with a section on NHK and 8K and

had the issues of multiple cameras, very long cable

things such as 4K ofﬂine, and the scary factor of

transferring data around. A number of company

“For UHD production sport is the worse case

white paper submissions were mixed in, along

scenario, and if you can do a live sport event in

UHD everything else becomes a little easier. I am

to create an EDL when you have RAW, AVB

not sure anything we have seen so far has had

over Ethernet, and gamut mapping algorithms

the wow factor, even the World Cup with Sony.

Prinyer Boon:“Colour gamut and HDR are complicated discussions, but hopefully the technical speciﬁcations will be cleared in mid-2016”

It looked good, but there is always one step we need to take.” As a potential course, ‘Navigating the UHD Ecosystem’ was incredibly dense and the

UHD metadata. The seminar wrapped with a

fast maturing BBC project for the IP delivery of 4K.

insertion of many commercial white paper

look at DVB-S2X, new work by the Pro MPEG

Netﬂix is a big player and big inﬂuence (and will

elements was confusing. But the return of a

Forum, HEVC dual-layer coding (to ﬁll in the HDR

SMPTE structure in the UK three years ago after

element), a paper on HEVC and HDR as that

Johns suggested we should look to Sky and

the BBC for the wow factor. “There is constant

experimenting and with HDR and HFR we are

course can be created and kept fresh

Upcoming is the DVB proﬁle of MPEG-DASH, the

closer to the consumer than ever before.

an 81-year gap, and the support of industry