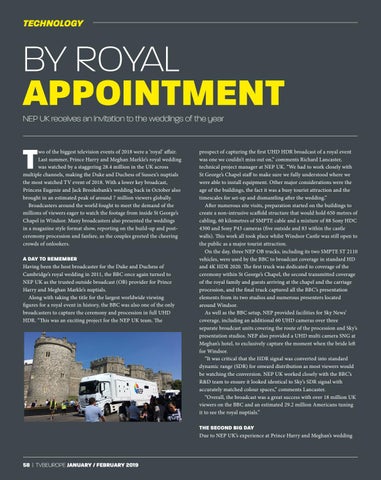 wo of the biggest television events of 2018 were a ‘royal’ affair. Last summer, Prince Harry and Meghan Markle’s royal wedding was watched by a staggering 28.4 million in the UK across multiple channels, making the Duke and Duchess of Sussex’s nuptials the most watched TV event of 2018. With a lower key broadcast, Princess Eugenie and Jack Brooksbank’s wedding back in October also brought in an estimated peak of around 7 million viewers globally. Broadcasters around the world fought to meet the demand of the millions of viewers eager to watch the footage from inside St George’s Chapel in Windsor. Many broadcasters also presented the weddings in a magazine style format show, reporting on the build-up and postceremony procession and fanfare, as the couples greeted the cheering crowds of onlookers. A DAY TO REMEMBER Having been the host broadcaster for the Duke and Duchess of Cambridge’s royal wedding in 2011, the BBC once again turned to NEP UK as the trusted outside broadcast (OB) provider for Prince Harry and Meghan Markle’s nuptials. Along with taking the title for the largest worldwide viewing figures for a royal event in history, the BBC was also one of the only broadcasters to capture the ceremony and procession in full UHD HDR. “This was an exciting project for the NEP UK team. The

prospect of capturing the first UHD HDR broadcast of a royal event was one we couldn’t miss out on,” comments Richard Lancaster, technical project manager at NEP UK. “We had to work closely with St George’s Chapel staff to make sure we fully understood where we were able to install equipment. Other major considerations were the age of the buildings, the fact it was a busy tourist attraction and the timescales for set-up and dismantling after the wedding.” After numerous site visits, preparation started on the buildings to create a non-intrusive scaffold structure that would hold 650 metres of cabling, 60 kilometres of SMPTE cable and a mixture of 88 Sony HDC 4300 and Sony P43 cameras (five outside and 83 within the castle walls). This work all took place whilst Windsor Castle was still open to the public as a major tourist attraction. On the day, three NEP OB trucks, including its two SMPTE ST 2110 vehicles, were used by the BBC to broadcast coverage in standard HD and 4K HDR 2020. The first truck was dedicated to coverage of the ceremony within St George’s Chapel, the second transmitted coverage of the royal family and guests arriving at the chapel and the carriage procession, and the final truck captured all the BBC’s presentation elements from its two studios and numerous presenters located around Windsor. As well as the BBC setup, NEP provided facilities for Sky News’ coverage, including an additional 60 UHD cameras over three separate broadcast units covering the route of the procession and Sky’s presentation studios. NEP also provided a UHD multi camera SNG at Meghan’s hotel, to exclusively capture the moment when the bride left for Windsor. “It was critical that the HDR signal was converted into standard dynamic range (SDR) for onward distribution as most viewers would be watching the conversion. NEP UK worked closely with the BBC’s R&amp;D team to ensure it looked identical to Sky’s SDR signal with accurately matched colour spaces,” comments Lancaster. “Overall, the broadcast was a great success with over 18 million UK viewers on the BBC and an estimated 29.2 million Americans tuning it to see the royal nuptials.” THE SECOND BIG DAY Due to NEP UK’s experience at Prince Harry and Meghan’s wedding