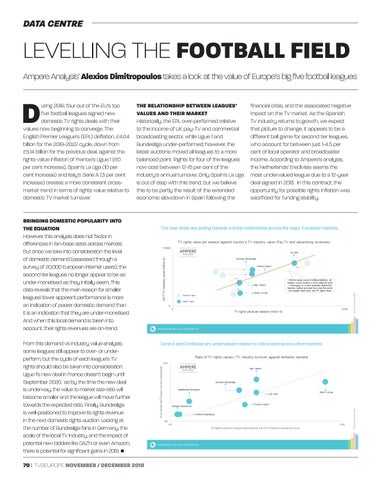 THE RELATIONSHIP BETWEEN LEAGUES’ VALUES AND THEIR MARKET Historically, the EPL over-performed relative to the income of UK pay-TV and commercial broadcasting sector, while Ligue 1 and Bundesliga under-performed; however, the latest auctions moved all leagues to a more balanced point. Rights for four of the leagues now cost between 12-15 per cent of the industry’s annual turnover. Only Spain’s La Liga is out of step with this trend, but we believe this to be partly the result of the extended economic slowdown in Spain following the

financial crisis, and the associated negative impact on the TV market. As the Spanish TV industry returns to growth, we expect that picture to change. It appears to be a different ball game for second tier leagues, who account for between just 1-4.5 per cent of local operator and broadcaster income. According to Ampere’s analysis, the Netherlands’ Eredivisie seems the most undervalued league due to a 12-year deal signed in 2013. In this contract, the opportunity for possible rights inflation was sacrificed for funding stability.

BRINGING DOMESTIC POPULARITY INTO THE EQUATION However, this analysis does not factor in differences in fan-base sizes across markets. But once we take into consideration the level of domestic demand (assessed through a survey of 20,000 European internet users), the second tier leagues no longer appear to be as under-monetised as they initially seem. This data reveals that the main reason for smaller leagues’ lower apparent performance is more an indication of poorer domestic demand than it is an indication that they are under-monetised. And when this local demand is taken into account, their rights revenues are on-trend. From this demand vs industry value analysis, some leagues still appear to over- or underperform, but the cycle of each league’s TV rights should also be taken into consideration. Ligue 1’s new deal in France doesn’t begin until September 2020, so by the time the new deal is underway, the value to market size ratio will become smaller and the league will move further towards the expected ratio. Finally, Bundesliga is well-positioned to improve its rights revenue in the next domestic rights auction. Looking at the number of Bundesliga fans in Germany, the scale of the local TV industry, and the impact of potential new bidders like DAZN or even Amazon, there is potential for significant gains in 2019. n