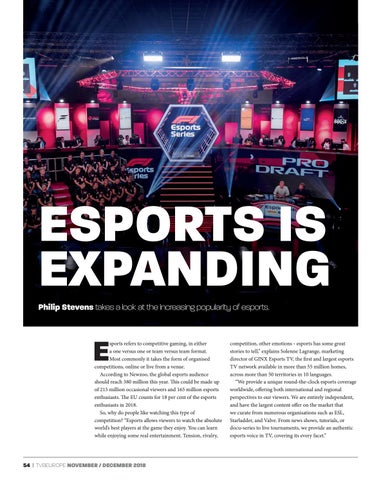 ESPORTS IS EXPANDING Philip Stevens takes a look at the increasing popularity of esports.

sports refers to competitive gaming, in either a one versus one or team versus team format. Most commonly it takes the form of organised competitions, online or live from a venue. According to Newzoo, the global esports audience should reach 380 million this year. This could be made up of 215 million occasional viewers and 165 million esports enthusiasts. The EU counts for 18 per cent of the esports enthusiasts in 2018. So, why do people like watching this type of competition? “Esports allows viewers to watch the absolute world’s best players at the game they enjoy. You can learn while enjoying some real entertainment. Tension, rivalry,

competition, other emotions - esports has some great stories to tell,” explains Solenne Lagrange, marketing director of GINX Esports TV, the first and largest esports TV network available in more than 55 million homes, across more than 50 territories in 10 languages. “We provide a unique round-the-clock esports coverage worldwide, offering both international and regional perspectives to our viewers. We are entirely independent, and have the largest content offer on the market that we curate from numerous organisations such as ESL, Starladder, and Valve. From news shows, tutorials, or docu-series to live tournaments, we provide an authentic esports voice in TV, covering its every facet.”