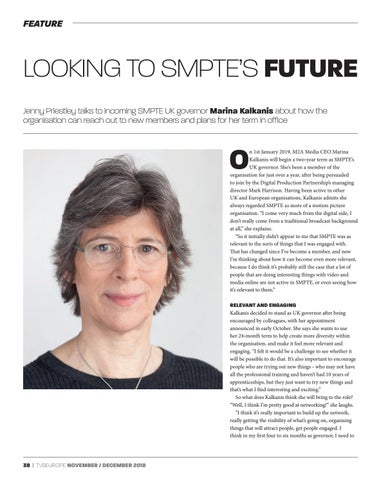 n 1st January 2019, M2A Media CEO Marina Kalkanis will begin a two-year term as SMPTE’s UK governor. She’s been a member of the organisation for just over a year, after being persuaded to join by the Digital Production Partnership’s managing director Mark Harrison. Having been active in other UK and European organisations, Kalkanis admits she always regarded SMPTE as more of a motion picture organisation. “I come very much from the digital side, I don’t really come from a traditional broadcast background at all,” she explains. “So it initially didn’t appear to me that SMPTE was as relevant to the sorts of things that I was engaged with. That has changed since I’ve become a member, and now I’m thinking about how it can become even more relevant, because I do think it’s probably still the case that a lot of people that are doing interesting things with video and media online are not active in SMPTE, or even seeing how it’s relevant to them.” RELEVANT AND ENGAGING Kalkanis decided to stand as UK governor after being encouraged by colleagues, with her appointment announced in early October. She says she wants to use her 24-month term to help create more diversity within the organisation, and make it feel more relevant and engaging. “I felt it would be a challenge to see whether it will be possible to do that. It’s also important to encourage people who are trying out new things - who may not have all the professional training and haven’t had 10 years of apprenticeships, but they just want to try new things and that’s what I find interesting and exciting.” So what does Kalkanis think she will bring to the role? “Well, I think I’m pretty good at networking!” she laughs. “I think it’s really important to build up the network, really getting the visibility of what’s going on, organising things that will attract people, get people engaged. I think in my first four to six months as governor, I need to