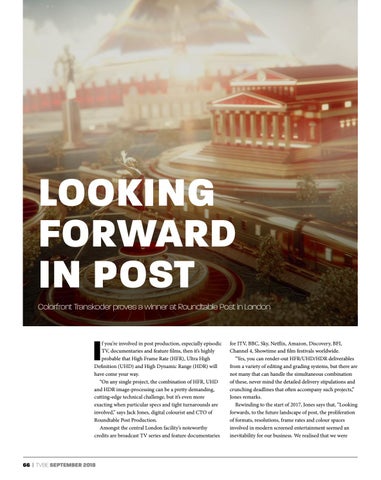 for ITV, BBC, Sky, Netflix, Amazon, Discovery, BFI, Channel 4, Showtime and film festivals worldwide. “Yes, you can render-out HFR/UHD/HDR deliverables from a variety of editing and grading systems, but there are not many that can handle the simultaneous combination of these, never mind the detailed delivery stipulations and crunching deadlines that often accompany such projects,” Jones remarks. Rewinding to the start of 2017, Jones says that, “Looking forwards, to the future landscape of post, the proliferation of formats, resolutions, frame rates and colour spaces involved in modern screened entertainment seemed an inevitability for our business. We realised that we were