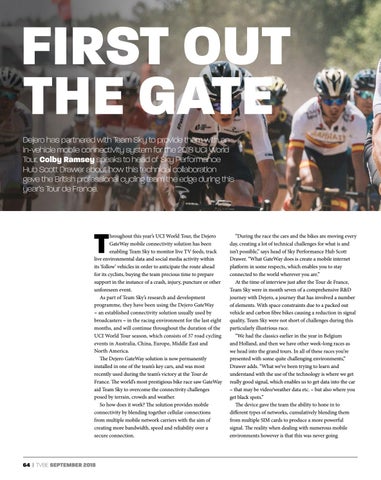 FIRST OUT THE GATE Dejero has partnered with Team Sky to provide them with an in-vehicle mobile connectivity system for the 2018 UCI World Tour. Colby Ramsey speaks to head of Sky Performance Hub Scott Drawer about how this technical collaboration gave the British professional cycling team the edge during this year’s Tour de France.

hroughout this year’s UCI World Tour, the Dejero GateWay mobile connectivity solution has been enabling Team Sky to monitor live TV feeds, track live environmental data and social media activity within its ‘follow’ vehicles in order to anticipate the route ahead for its cyclists, buying the team precious time to prepare support in the instance of a crash, injury, puncture or other unforeseen event. As part of Team Sky’s research and development programme, they have been using the Dejero GateWay – an established connectivity solution usually used by broadcasters – in the racing environment for the last eight months, and will continue throughout the duration of the UCI World Tour season, which consists of 37 road cycling events in Australia, China, Europe, Middle East and North America. The Dejero GateWay solution is now permanently installed in one of the team’s key cars, and was most recently used during the team’s victory at the Tour de France. The world’s most prestigious bike race saw GateWay aid Team Sky to overcome the connectivity challenges posed by terrain, crowds and weather. So how does it work? The solution provides mobile connectivity by blending together cellular connections from multiple mobile network carriers with the aim of creating more bandwidth, speed and reliability over a secure connection.

“During the race the cars and the bikes are moving every day, creating a lot of technical challenges for what is and isn’t possible,” says head of Sky Performance Hub Scott Drawer. “What GateWay does is create a mobile internet platform in some respects, which enables you to stay connected to the world wherever you are.” At the time of interview just after the Tour de France, Team Sky were in month seven of a comprehensive R&amp;D journey with Dejero, a journey that has involved a number of elements. With space constraints due to a packed out vehicle and carbon fibre bikes causing a reduction in signal quality, Team Sky were not short of challenges during this particularly illustrious race. “We had the classics earlier in the year in Belgium and Holland, and then we have other week-long races as we head into the grand tours. In all of these races you’re presented with some quite challenging environments,” Drawer adds. “What we’ve been trying to learn and understand with the use of the technology is where we get really good signal, which enables us to get data into the car – that may be video/weather data etc. – but also where you get black spots.” The device gave the team the ability to hone in to different types of networks, cumulatively blending them from multiple SIM cards to produce a more powerful signal. The reality when dealing with numerous mobile environments however is that this was never going