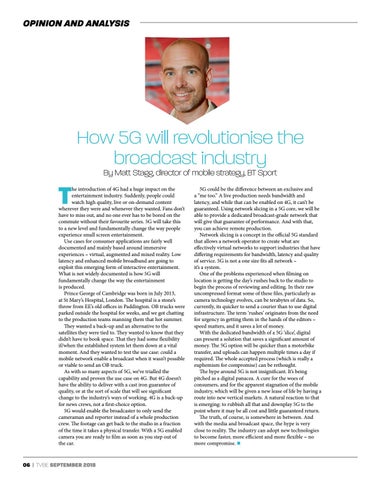 How 5G will revolutionise the broadcast industry By Matt Stagg, director of mobile strategy, BT Sport

he introduction of 4G had a huge impact on the entertainment industry. Suddenly, people could watch high quality, live or on-demand content wherever they were and whenever they wanted. Fans don’t have to miss out, and no one ever has to be bored on the commute without their favourite series. 5G will take this to a new level and fundamentally change the way people experience small screen entertainment. Use cases for consumer applications are fairly well documented and mainly based around immersive experiences – virtual, augmented and mixed reality. Low latency and enhanced mobile broadband are going to exploit this emerging form of interactive entertainment. What is not widely documented is how 5G will fundamentally change the way the entertainment is produced. Prince George of Cambridge was born in July 2013, at St Mary’s Hospital, London. The hospital is a stone’s throw from EE’s old offices in Paddington. OB trucks were parked outside the hospital for weeks, and we got chatting to the production teams manning them that hot summer. They wanted a back-up and an alternative to the satellites they were tied to. They wanted to know that they didn’t have to book space. That they had some flexibility if/when the established system let them down at a vital moment. And they wanted to test the use case: could a mobile network enable a broadcast when it wasn’t possible or viable to send an OB truck. As with so many aspects of 5G, we’ve trialled the capability and proven the use case on 4G. But 4G doesn’t have the ability to deliver with a cast iron guarantee of quality, or at the sort of scale that will see significant change to the industry’s ways of working. 4G is a back-up for news crews, not a first-choice option. 5G would enable the broadcaster to only send the cameraman and reporter instead of a whole production crew. The footage can get back to the studio in a fraction of the time it takes a physical transfer. With a 5G enabled camera you are ready to film as soon as you step out of the car.

5G could be the difference between an exclusive and a “me too.” A live production needs bandwidth and latency, and while that can be enabled on 4G, it can’t be guaranteed. Using network slicing in a 5G core, we will be able to provide a dedicated broadcast-grade network that will give that guarantee of performance. And with that, you can achieve remote production. Network slicing is a concept in the official 5G standard that allows a network operator to create what are effectively virtual networks to support industries that have differing requirements for bandwidth, latency and quality of service. 5G is not a one size fits all network – it’s a system. One of the problems experienced when filming on location is getting the day’s rushes back to the studio to begin the process of reviewing and editing. In their raw uncompressed format some of these files, particularly as camera technology evolves, can be terabytes of data. So, currently, its quicker to send a courier than to use digital infrastructure. The term ‘rushes’ originates from the need for urgency in getting them in the hands of the editors – speed matters, and it saves a lot of money. With the dedicated bandwidth of a 5G ‘slice’, digital can present a solution that saves a significant amount of money. The 5G option will be quicker than a motorbike transfer, and uploads can happen multiple times a day if required. The whole accepted process (which is really a euphemism for compromise) can be rethought. The hype around 5G is not insignificant. It’s being pitched as a digital panacea. A cure for the woes of consumers, and for the apparent stagnation of the mobile industry, which will be given a new lease of life by having a route into new vertical markets. A natural reaction to that is emerging: to rubbish all that and downplay 5G to the point where it may be all cost and little guaranteed return. The truth, of course, is somewhere in between. And with the media and broadcast space, the hype is very close to reality. The industry can adopt new technologies to become faster, more efficient and more flexible – no more compromise. n