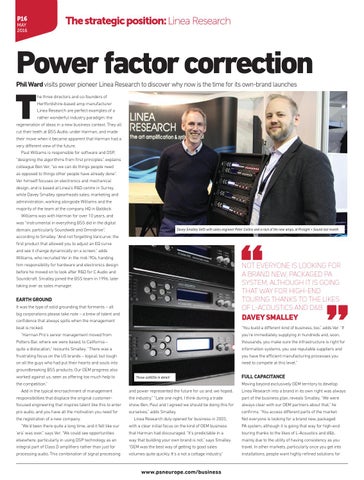 he three directors and co-founders of Hertfordshire-based amp manufacturer Linea Research are perfect examples of a rather wonderful industry paradigm: the regeneration of ideas in a new business context. They all cut their teeth at BSS Audio, under Harman, and made their move when it became apparent that Harman had a very different view of the future. Paul Williams is responsible for software and DSP, “designing the algorithms from ﬁrst principles”, explains colleague Ben Ver, “so we can do things people need as opposed to things other people have already done”. Ver himself focuses on electronics and mechanical design, and is based at Linea’s R&amp;D centre in Surrey, while Davey Smalley spearheads sales, marketing and administration, working alongside Williams and the majority of the team at the company HQ in Baldock. Williams was with Harman for over 10 years, and was “instrumental in everything BSS did in the digital domain, particularly Soundweb and Omnidrive”, according to Smalley. “And not forgetting Varicurve: the ﬁrst product that allowed you to adjust an EQ curve and see it change dynamically on a screen,” adds Williams, who recruited Ver in the mid-’90s, handing him responsibility for hardware and electronics design before he moved on to look after R&amp;D for C Audio and Soundcraft. Smalley joined the BSS team in 1996, later taking over as sales manager.

Davey Smalley (left) with sales engineer Peter Collins and a rack of the new amps, at Prolight + Sound last month

Not everyone is looking for a brand new, packaged PA system, although it is going that way for high-end touring thanks to the likes of L-Acoustics and d&amp;b

EARTH GROUND It was the type of solid grounding that forments – all big corporations please take note – a brew of talent and conﬁdence that always spills when the management boat is rocked. “Harman Pro’s senior management moved from Potters Bar, where we were based, to California – quite a dislocation,” recounts Smalley. “There was a frustrating focus on the US brands – logical, but tough on all the guys who had put their hearts and souls into groundbreaking BSS products. Our OEM progress also worked against us, seen as offering too much help to the competition.” Add in the typical encroachment of management responsibilities that displace the original customerfocused engineering that inspires talent like this to enter pro audio, and you have all the motivation you need for the registration of a new company. “We’d been there quite a long time, and it felt like our ‘era’ was over,” says Ver. “We could see opportunities elsewhere, particularly in using DSP technology as an integral part of Class D ampliﬁers rather than just for processing audio. This combination of signal processing

Davey Smalley “You build a different kind of business, too,” adds Ver. “If you’re immediately supplying in hundreds and, soon, thousands, you make sure the infrastructure is right for information systems, you use reputable suppliers and you have the efficient manufacturing processes you need to compete at this level.” Those 44M20s in detail!

and power represented the future for us and, we hoped, the industry.” “Late one night, I think during a trade show, Ben, Paul and I agreed we should be doing this for ourselves,” adds Smalley. Linea Research duly opened for business in 2003, with a clear initial focus on the kind of OEM business that Harman had discouraged. “It’s predictable in a way that building your own brand is not,” says Smalley. “OEM was the best way of getting to good sales volumes quite quickly. It’s a not a cottage industry.”

FULL CAPACITANCE Moving beyond exclusively OEM territory to develop Linea Research into a brand in its own right was always part of the business plan, reveals Smalley. “We were always clear with our OEM partners about that,” he conﬁrms. “You access different parts of the market. Not everyone is looking for a brand new, packaged PA system, although it is going that way for high-end touring thanks to the likes of L-Acoustics and d&amp;b, mainly due to the utility of having consistency as you travel. In other markets, particularly once you get into installations, people want highly reﬁned solutions for