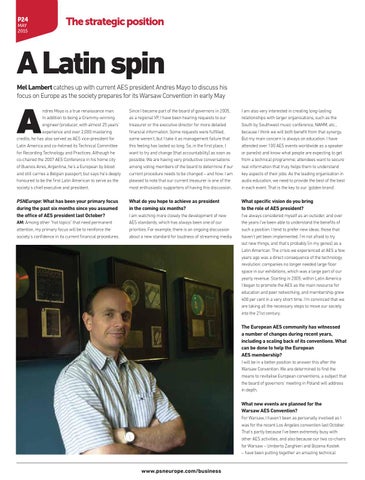 ndres Mayo is a true renaissance man. In addition to being a Grammy-winning engineer/producer, with almost 25 years’ experience and over 2,000 mastering credits, he has also served as AES vice-president for Latin America and co-helmed its Technical Committee for Recording Technology and Practices. Although he co-chaired the 2007 AES Conference in his home city of Buenos Aires, Argentina, he’s a European by blood and still carries a Belgian passport, but says he’s deeply honoured to be the ﬁrst Latin American to serve as the society’s chief executive and president.

Since I became part of the board of governors in 2005, as a regional VP, I have been hearing requests to our treasurer or the executive director for more detailed ﬁnancial information. Some requests were fulﬁlled, some weren’t, but I take it as management failure that this feeling has lasted so long. So, in the ﬁrst place, I want to try and change [that accountability] as soon as possible. We are having very productive conversations among voting members of the board to determine if our current procedure needs to be changed – and how. I am pleased to note that our current treasurer is one of the most enthusiastic supporters of having this discussion.

I am also very interested in creating long-lasting relationships with larger organisations, such as the South by Southwest music conference, NAMM, etc., because I think we will both beneﬁt from that synergy. But my main concern is always on education. I have attended over 100 AES events worldwide as a speaker or panelist and know what people are expecting to get from a technical programme; attendees want to secure real information that truly helps them to understand key aspects of their jobs. As the leading organisation in audio education, we need to provide the best of the best in each event. That is the key to our ‘golden brand’.

PSNEurope: What has been your primary focus during the past six months since you assumed the office of AES president last October?

What do you hope to achieve as president in the coming six months?

What speciﬁc vision do you bring to the role of AES president?

I am watching more closely the development of new AES standards, which has always been one of our priorities. For example, there is an ongoing discussion about a new standard for loudness of streaming media.

I’ve always considered myself as an outsider, and over the years I’ve been able to understand the beneﬁts of such a position. I tend to prefer new ideas; those that haven’t yet been implemented. I’m not afraid to try out new things, and that’s probably [in my genes] as a Latin American. The crisis we experienced at AES a few years ago was a direct consequence of the technology revolution: companies no longer needed large ﬂoor space in our exhibitions, which was a large part of our yearly revenue. Starting in 2005, within Latin America I began to promote the AES as the main resource for education and peer networking, and membership grew 400 per cent in a very short time. I’m convinced that we are taking all the necessary steps to move our society into the 21st century.

AM: Among other “hot topics” that need permanent attention, my primary focus will be to reinforce the society’s conﬁdence in its current ﬁnancial procedures.

The European AES community has witnessed a number of changes during recent years, including a scaling back of its conventions. What can be done to help the European AES membership? I will be in a better position to answer this after the Warsaw Convention. We are determined to ﬁnd the means to revitalise European conventions, a subject that the board of governors’ meeting in Poland will address in depth.

What new events are planned for the Warsaw AES Convention? For Warsaw, I haven’t been as personally involved as I was for the recent Los Angeles convention last October. That’s partly because I’ve been extremely busy with other AES activities, and also because our two co-chairs for Warsaw – Umberto Zanghieri and Bozena Kostek – have been putting together an amazing technical