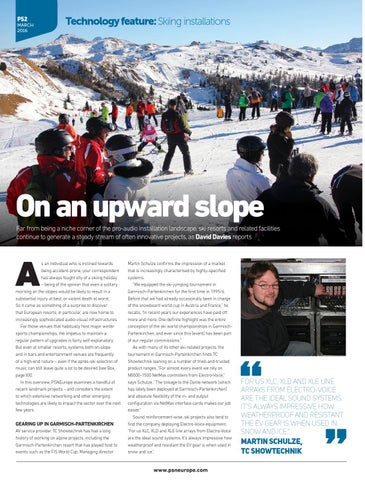 On an upward slope Far from being a niche corner of the pro-audio installation landscape, ski resorts and related facilities continue to generate a steady stream of often innovative projects, as David Davies reports

s an individual who is inclined towards being accident-prone, your correspondent has always fought shy of a skiing holiday – being of the opinion that even a solitary morning on the slopes would be likely to result in a substantial injury at best, or violent death at worst. So it came as something of a surprise to discover that European resorts, in particular, are now home to increasingly sophisticated audio-visual infrastructures. For those venues that habitually host major winter sports championships, the impetus to maintain a regular pattern of upgrades is fairly self-explanatory. But even at smaller resorts, systems both on-slope and in bars and entertainment venues are frequently of a high-end nature – even if the après-ski selection of music can still leave quite a lot to be desired [see Box, page XX]. In this overview, PSNEurope examines a handful of recent landmark projects – and considers the extent to which extensive networking and other emerging technologies are likely to impact the sector over the next few years.

Martin Schulze conﬁrms the impression of a market that is increasingly characterised by highly-speciﬁed systems. “We equipped the ski-jumping tournament in Garmisch-Partenkirchen for the ﬁrst time in 1995/6. Before that we had already occasionally been in charge of the snowboard world cup in Austria and France,” he recalls. “In recent years our experiences have paid off more and more. One deﬁnite highlight was the entire conception of the ski world championships in GarmischPartenkirchen, and ever since this [event] has been part of our regular commissions.” As with many of its other ski-related projects, the tournament in Garmisch-Partenkirchen ﬁnds TC Showtechnik leaning on a number of tried-and-trusted product ranges. “For almost every event we rely on N8000-1500 NetMax controllers from Electro-Voice,” says Schulze. “The linkage to the Dante network [which has lately been deployed at Garmisch-Partenkirchen] and absolute ﬂexibility of the in- and output conﬁguration via NetMax interface cards makes our job easier.” Sound reinforcement-wise, ski projects also tend to

GEARING UP IN GARMISCH-PARTENKIRCHEN

ﬁnd the company deploying Electro-Voice equipment. “For us XLC, XLD and XLE line arrays from Electro-Voice are the ideal sound systems. It’s always impressive how weatherproof and resistant the EV gear is when used in snow and ice.”

AV service provider TC Showtechnik has had a long history of working on alpine projects, including the Garmisch-Partenkirchen resort that has played host to events such as the FIS World Cup. Managing director

For us XLC, XLD and XLE line arrays from Electro-Voice are the ideal sound systems. It’s always impressive how weatherproof and resistant the EV gear is when used in snow and ice.”