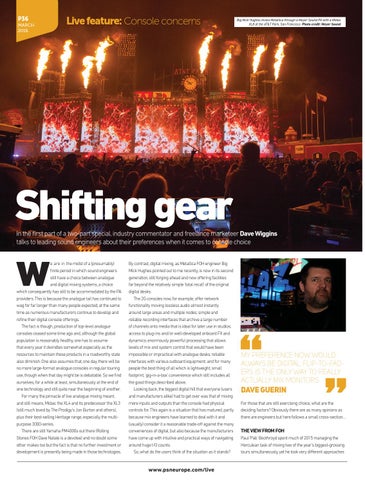 Shifting gear In the ﬁrst part of a two-part special, industry commentator and freelance marketeer Dave Wiggins talks to leading sound engineers about their preferences when it comes to console choice

e are in the midst of a (presumably) ﬁnite period in which sound engineers still have a choice between analogue and digital mixing systems, a choice which consequently has still to be accommodated by the PA providers. This is because the analogue tail has continued to wag for far longer than many people expected, at the same time as numerous manufacturers continue to develop and reﬁne their digital console offerings. The fact is though, production of top-level analogue consoles ceased some time ago and, although the global population is reasonably healthy, one has to assume that every year it dwindles somewhat especially as the resources to maintain these products in a roadworthy state also diminish. One also assumes that, one day, there will be no more large-format analogue consoles in regular touring use, though when that day might be is debatable. So we ﬁnd ourselves, for a while at least, simultaneously at the end of one technology and still quite near the beginning of another. For many the pinnacle of live analogue mixing meant, and still means, Midas: the XL4 and its predecessor the XL3 (still much loved by The Prodigy’s Jon Burton and others), plus their best-selling Heritage range, especially the multipurpose 3000-series. There are still Yamaha PM4000s out there (Rolling Stones FOH Dave Natale is a devotee) and no doubt some other makes too but the fact is that no further investment or development is presently being made in those technologies.

By contrast, digital mixing, as Metallica FOH engineer Big Mick Hughes pointed out to me recently, is now in its second generation, still forging ahead and now offering facilities far beyond the relatively simple ‘total recall’ of the original digital desks. The 2G consoles now, for example, offer network functionality moving lossless audio almost instantly around large areas and multiple nodes; simple and reliable recording interfaces that archive a large number of channels onto media that is ideal for later use in studios; access to plug-ins and/or well-developed onboard FX and dynamics; enormously powerful processing that allows levels of mix and system control that would have been impossible or impractical with analogue desks; reliable interfaces with various outboard equipment; and for many people the best thing of all which is lightweight, small footprint, ‘gig-in-a-box’ convenience which still includes all the good things described above. Looking back, the biggest digital hill that everyone (users and manufacturers alike) had to get over was that of mixing more inputs and outputs than the console had physical controls for. This again is a situation that has matured, partly because mix engineers have learned to deal with it and (usually) consider it a reasonable trade-off against the many conveniences of digital, but also because the manufacturers have come up with intuitive and practical ways of navigating around huge I/O counts. So, what do the users think of the situation as it stands?

My preference now would always be digital, ﬂip-to-faders is the only way to really actually mix monitors

Dave Guerin For those that are still exercising choice, what are the deciding factors? Obviously there are as many opinions as there are engineers but here follows a small cross-section…

THE VIEW FROM FOH Paul ‘Pab’ Boothroyd spent much of 2015 managing the Herculean task of mixing two of the year’s biggest-grossing tours simultaneously, yet he took very different approaches