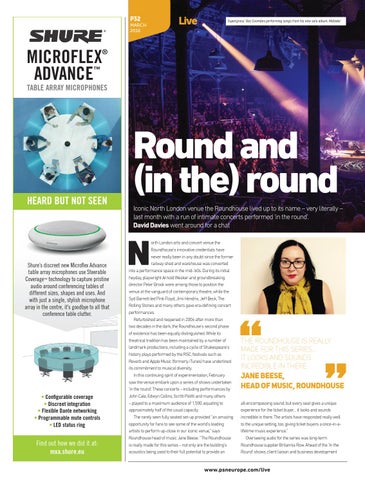 HEARD BUT NOT SEEN

Find out how we did it at: mxa.shure.eu

Round and (in the) round Iconic North London venue the Roundhouse lived up to its name – very literally – last month with a run of intimate concerts performed ‘in the round’. David Davies went around for a chat

orth London arts and concert venue the Roundhouse’s innovative credentials have never really been in any doubt since the former railway shed and warehouse was converted into a performance space in the mid-’60s. During its initial heyday, playwright Arnold Wesker and groundbreaking director Peter Brook were among those to position the venue at the vanguard of contemporary theatre, while the Syd Barrett-led Pink Floyd, Jimi Hendrix, Jeff Beck, The Rolling Stones and many others gave era-deﬁning concert performances. Refurbished and reopened in 2006 after more than two decades in the dark, the Roundhouse’s second phase of existence has been equally distinguished. While its theatrical tradition has been maintained by a number of landmark productions, including a cycle of Shakespeare’s history plays performed by the RSC, festivals such as Reverb and Apple Music (formerly iTunes) have underlined its commitment to musical diversity. In this continuing spirit of experimentation, February saw the venue embark upon a series of shows undertaken ‘in the round’. These concerts – including performances by John Cale, Edwyn Collins, Scritti Politti and many others – played to a maximum audience of 1,500, equating to approximately half of the usual capacity. The rarely seen fully seated set-up provided “an amazing opportunity for fans to see some of the world’s leading artists to perform up-close in our iconic venue,” says Roundhouse head of music Jane Beese. “The Roundhouse is really made for this series – not only are the building’s acoustics being used to their full potential to provide an

Jane Beese, head of music, Roundhouse all-encompassing sound, but every seat gives a unique experience for the ticket buyer… it looks and sounds incredible in there. The artists have responded really well to the unique setting, too, giving ticket buyers a once-in-alifetime music experience.” Overseeing audio for the series was long-term Roundhouse supplier Britannia Row. Ahead of the ‘In the Round’ shows, client liaison and business development