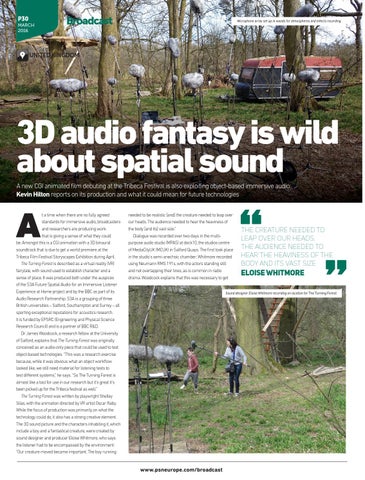 Microphone array set up in woods for atmospheres and effects recording

3D audio fantasy is wild about spatial sound A new CGI animated ﬁlm debuting at the Tribeca Festival is also exploiting object-based immersive audio. Kevin Hilton reports on its production and what it could mean for future technologies

t a time when there are no fully agreed standards for immersive audio, broadcasters and researchers are producing work that is giving a sense of what they could be. Amongst this is a CGI animation with a 3D binaural soundtrack that is due to get a world premiere at the Tribeca Film Festival Storyscapes Exhibition during April. The Turning Forest is described as a virtual reality (VR) fairytale, with sound used to establish character and a sense of place. It was produced both under the auspices of the S3A Future Spatial Audio for an Immersive Listener Experience at Home project and by the BBC as part of its Audio Research Partnership. S3A is a grouping of three British universities – Salford, Southampton and Surrey – all sporting exceptional reputations for acoustics research. It is funded by EPSRC (Engineering and Physical Science Research Council) and is a partner of BBC R&D. Dr James Woodcock, a research fellow at the University of Salford, explains that The Turning Forest was originally conceived as an audio-only piece that could be used to test object-based technologies. “This was a research exercise because, while it was obvious what an object workﬂow looked like, we still need material for listening tests to test different systems,” he says. “So The Turning Forest is almost like a tool for use in our research but it’s great it’s been picked up for the Tribeca festival as well.” The Turning Forest was written by playwright Shelley Silas, with the animation directed by VR artist Oscar Raby. While the focus of production was primarily on what the technology could do, it also has a strong creative element. The 3D sound picture and the characters inhabiting it, which include a boy and a fantastical creature, were created by sound designer and producer Eloise Whitmore, who says the listener had to be encompassed by the environment: “Our creature moved became important. The boy running

needed to be realistic [and] the creature needed to leap over our heads. The audience needed to hear the heaviness of the body [and its] vast size.” Dialogue was recorded over two days in the multipurpose audio studio (MPAS) at dock10, the studios centre of MediaCityUK (MCUK) in Salford Quays. The ﬁrst took place in the studio’s semi-anechoic chamber; Whitmore recorded using Neumann RMS 191s, with the actors standing still and not overlapping their lines, as is common in radio drama. Woodcock explains that this was necessary to get

The creature needed to leap over our heads. The audience needed to hear the heaviness of the body and its vast size