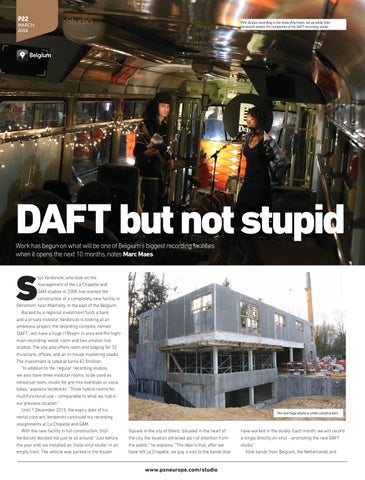 Pink Oculus recording in the Insta-Vinyl tram, set up while Stijn Verdonckt awaits the completion of his DAFT recording studio

DAFT but not stupid Work has begun on what will be one of Belgium’s biggest recording facilities when it opens the next 10 months, notes Marc Maes

tijn Verdonckt, who took on the management of the La Chapelle and GAM studios in 2008, has started the construction of a completely new facility in Géromont, near Malmedy, in the east of the Belgium. Backed by a regional investment fund, a bank and a private investor, Verdonckt is looking at an ambitious project: the recording complex, named ‘DAFT’, will have a huge (185sqm in area and 9m high) main recording ‘wood’ room and two smaller live studios. The site also offers room and lodging for 32 musicians, offices, and an in-house mastering studio. The investment is rated at some €2.5million. “In addition to the ‘regular’ recording studios, we also have three modular rooms, to be used as rehearsal room, studio for pre-mix overdubs or vocal takes,” explains Verdonckt. “Three hybrid rooms for multifunctional use – comparable to what we had in our previous location.” Until 1 December 2015, the expiry date of his rental contract, Verdonckt continued his recording assignments at La Chapelle and GAM. With the new facility in full construction, Stijn Verdonckt decided not just to sit around. “Just before the year end, we installed an ‘insta-vinyl studio’ in an empty tram. The vehicle was parked in the Kouter

The new huge studio is under construction!

Square in the city of Ghent. Situated in the heart of the city, the location attracted alo t of attention from the public,” he explains. “The idea is that, after we have left La Chapelle, we pay a visit to the bands that

have worked in the studio. Each month, we will record a single directly on vinyl – promoting the new DAFT studio.” Nine bands from Belgium, the Netherlands and