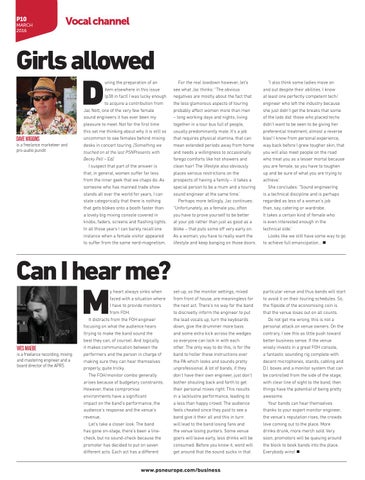 DAVE WIGGINS is a freelance marketeer and pro-audio pundit

uring the preparation of an item elsewhere in this issue (p38 in fact) I was lucky enough to acquire a contribution from Jac Nott, one of the very few female sound engineers it has ever been my pleasure to meet. Not for the ﬁrst time this set me thinking about why it is still so uncommon to see females behind mixing desks in concert touring. [Something we touched on at the last PSNPresents with Becky Pell – Ed] I suspect that part of the answer is that, in general, women suffer far less from the inner geek that we chaps do. As someone who has manned trade show stands all over the world for years, I can state categorically that there is nothing that gets blokes onto a booth faster than a lovely big mixing console covered in knobs, faders, screens and ﬂashing lights. In all those years I can barely recall one instance when a female visitor appeared to suffer from the same nerd-magnetism.

For the real lowdown however, let’s see what Jac thinks: “The obvious negatives are mostly about the fact that the less glamorous aspects of touring probably affect women more than men – long working days and nights, living together in a tour bus full of people, usually predominantly male. It’s a job that requires physical stamina, that can mean extended periods away from home and needs a willingness to occasionally forego comforts like hot showers and clean hair! The lifestyle also obviously places serious restrictions on the prospects of having a family – it takes a special person to be a mum and a touring sound engineer at the same time.’ Perhaps more tellingly, Jac continues: “Unfortunately, as a female you, often you have to prove yourself to be better at your job rather than just as good as a bloke – that puts some off very early on. As a woman, you have to really want the lifestyle and keep banging on those doors.

“I also think some ladies move on and out despite their abilities. I know at least one perfectly competent tech/ engineer who left the industry because she just didn’t get the breaks that some of the lads did: those who placed techs didn’t want to be seen to be giving her preferential treatment, almost a reverse bias! I know from personal experience, way back before I grew tougher skin, that you will also meet people on the road who treat you as a lesser mortal because you are female, so you have to toughen up and be sure of what you are trying to achieve.’ She concludes: “Sound engineering is a technical discipline and is perhaps regarded as less of a woman’s job than, say, catering or wardrobe. It takes a certain kind of female who is even interested enough in the technical side.’ Looks like we still have some way to go to achieve full emancipation…  

set-up, so the monitor settings, mixed from front of house, are meaningless for the next act. There’s no way for the band to discreetly inform the engineer to put the lead vocals up, turn the keyboards down, give the drummer more bass and some extra kick across the wedges so everyone can lock in with each other. The only way to do this, is for the band to holler these instructions over the PA which looks and sounds pretty unprofessional. A lot of bands, if they don’t have their own engineer, just don’t bother shouting back and forth to get their personal mixes right. This results in a lacklustre performance, leading to a less than happy crowd. The audience feels cheated since they paid to see a band give it their all and this in turn will lead to the band losing fans and the venue losing punters. Some venue goers will leave early, less drinks will be consumed. Before you know it, word will get around that the sound sucks in that

particular venue and thus bands will start to avoid it on their touring schedules. So, the ﬂipside of the economising coin is that the venue loses out on all counts. Do not get me wrong, this is not a personal attack on venue owners. On the contrary, I see this as little push toward better business sense. If the venue wisely invests in a great FOH console, a fantastic sounding rig complete with decent microphones, stands, cabling and D.I. boxes and a monitor system that can be controlled from the side of the stage, with clear line of sight to the band, then things have the potential of being pretty awesome. Your bands can hear themselves thanks to your expert monitor engineer, the venue’s reputation rises, the crowds love coming out to the place. More drinks drunk, more merch sold. Very soon, promotors will be queuing around the block to book bands into the place. Everybody wins!  

Can I hear me?

WES MAEBE is a freelance recording, mixing and mastering engineer and a board director of the APRS

y heart always sinks when faced with a situation where I have to provide monitors from FOH. It distracts from the FOH engineer focusing on what the audience hears (trying to make the band sound the best they can, of course). And logically, it makes communication between the performers and the person in charge of making sure they can hear themselves properly, quite tricky. The FOH/monitor combo generally arises because of budgetary constraints. However, these compromise environments have a signiﬁcant impact on the band’s performance, the audience’s response and the venue’s revenue. Let’s take a closer look. The band has gone on-stage, there’s been a linecheck, but no sound-check because the promoter has decided to put on seven different acts. Each act has a different