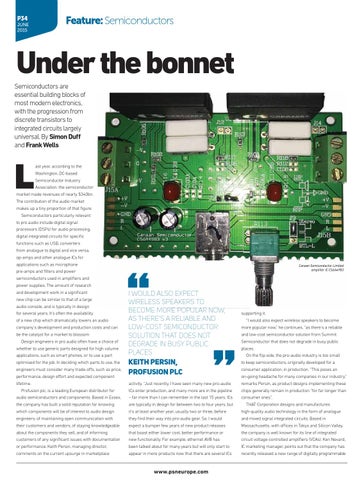 Under the bonnet Semiconductors are essential building blocks of most modern electronics, with the progression from discrete transistors to integrated circuits largely universal. By Simon Duff and Frank Wells

ast year, according to the Washington, DC-based Semiconductor Industry Association, the semiconductor market made revenues of nearly $340bn. The contribution of the audio market makes up a tiny proportion of that ﬁgure. Semiconductors particularly relevant to pro audio include digital signal processors (DSPs) for audio processing, digital integrated circuits for speciﬁc functions such as USB, converters from analogue to digital and vice versa, op-amps and other analogue ICs for applications such as microphone pre-amps and ﬁlters and power semiconductors used in ampliﬁers and power supplies. The amount of research and development work in a signiﬁcant new chip can be similar to that of a large audio console, and is typically in design for several years. It’s often the availability of a new chip which dramatically lowers an audio company’s development and production costs and can be the catalyst for a market to blossom Design engineers in pro audio often have a choice of whether to use generic parts designed for high volume applications, such as smart phones, or to use a part optimised for the job. In deciding which parts to use, the engineers must consider many trade-offs, such as price, performance, design effort and expected component lifetime. Profusion plc, is a leading European distributor for audio semiconductors and components. Based in Essex, the company has built a solid reputation for knowing which components will be of interest to audio design engineers, of maintaining open communication with their customers and vendors, of staying knowledgeable about the components they sell, and of informing customers of any signiﬁcant issues with documentation or performance. Keith Persin, managing director, comments on the current upsurge in marketplace

I would also expect wireless speakers to become more popular now, as there’s a reliable and low-cost semiconductor solution that does not degrade in busy public places

Keith Persin, Profusion plc activity. “Just recently, I have seen many new pro-audio ICs enter production, and many more are in the pipeline – far more than I can remember in the last 15 years. ICs are typically in design for between two to four years, but it’s at least another year, usually two or three, before they ﬁnd their way into pro-audio gear. So, I would expect a bumper few years of new product releases that boast either lower cost, better performance or new functionality. For example, ethernet AVB has been talked about for many years but will only start to appear in more products now that there are several ICs

supporting it. “I would also expect wireless speakers to become more popular now,” he continues, “as there’s a reliable and low-cost semiconductor solution from Summit Semiconductor that does not degrade in busy public places. On the ﬂip side, the pro-audio industry is too small to keep semiconductors, originally developed for a consumer application, in production. “This poses an on-going headache for many companies in our industry,” remarks Persin, as product designs implementing these chips generally remain in production “for far longer than consumer ones”. THAT Corporation designs and manufactures high-quality audio technology in the form of analogue and mixed signal integrated circuits. Based in Massachusetts, with offices in Tokyo and Silicon Valley, the company is well known for its line of integrated circuit voltage-controlled ampliﬁers (VCAs). Ken Nevard, IC marketing manager, points out that the company has recently released a new range of digitally programmable