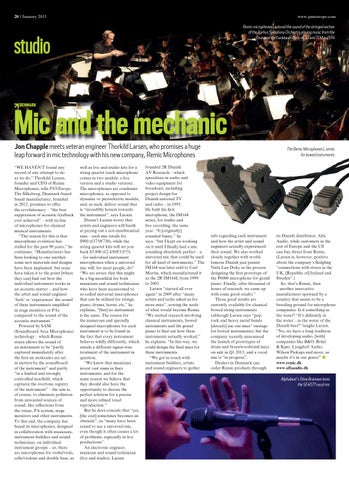 Mic and the mechanic Jon Chapple meets veteran engineer Thorkild Larsen, who promises a huge leap forward in mic technology with his new company, Remic Microphones “WE HAVEN’T found any record of any attempt to do as we do,” Thorkild Larsen, founder and CEO of Remic Microphones, tells PSNEurope. The Silkeborg, Denmark-based based manufacturer, founded in 2012, promises to offer the revolutionary – “the best suppression of acoustic feedback ever achieved” – with its line of microphones for classical musical instruments. “The reason for this is that microphone evolution has stalled for the past 90 years,” he continues. “Manufacturers has been looking to one another: some new materials and designs have been implanted, but none have taken it to the point [where they can] find out how the individual instrument works in an acoustic matter – and how the artist and sound engineer ‘feels’ or ‘experiences’ the sound of these instruments amplified in stage monitors or PAs compared to the sound of the acoustic instrument.” Powered by SAM (Soundboard Area Microphone) technology – which Remic states allows the sound of an instrument to be “partly captured immediately after the first air molecules are set in motion by the soundboard of the instrument” and partly “in a limited and strongly controlled nearfield, which captures the overtone registry of the instrument” – the aim is, of course, to eliminate pollution from unwanted sources of sound, like reflections from the venue, PA system, stage monitors and other instruments. To this end, the company has based its microphones, designed in collaboration with musicians, instrument-builders and sound technicians, on individual instrument groups – so, there are microphones for violin/viola, cello/violone and double bass, as

well as live and studio kits for a string quartet (each microphone comes in two models: a live version and a studio version). The microphones are condenser microphones, as opposed to dynamic or piezoelectric models, and, as such, deliver sound that is “incredibly honest towards the instrument”, says Larsen. Doesn’t Larsen worry that artists and engineers will baulk at paying out a not-insubstantial sum – each mic retails for $900 (£575/€730), while the string quartet kits will set you back $3,800 (£2,430/€3,075) – for individual instrument microphones when a universal mic will, for most people, do? “We are aware that this might be a big mouthful for both musicians and sound technicians who have been accustomed to so-called universal microphones that can be utilised for strings, piano, drums, horns, etc,” he explains, “[but] no instrument is the same. The reason for the numerous and specially designed microphones for each instrument is to be found in the fact that every instrument behaves wildly differently, which entails a different signal-wise treatment of the instrument in question. “We know that musicians invest vast sums in finer instruments, and for the same reason we believe that they should also have the opportunity to choose the perfect solution for a precise and more refined tonal reproduction.” But he does concede that “yes, [the cost] sometimes becomes an obstacle”, as “many have been raised to use a universal mic, even though it often causes a lot of problems, especially in live productions”. An electronic engineer, musician and sound technician (live and studio), Larsen

founded 2R Danish AV Research – which specialises in audio and video equipment for broadcast, including project design for Danish national TV and radio – in 1995. He built his first microphone, the IM164 series, for studio and live recording, the same year. “It [originally] sounded funny,” he says, “but I kept on working on it until I finally had a mic sounding absolutely perfect – a universal mic that could be used for all kind of instruments.” The IM164 was later sold to Carl Martin, which manufactured it as the 2R IM164L from 1999 to 2003. Larsen “started all over again” in 2009 after “many artists and techs asked us for more mics”, sowing the seeds of what would become Remic. “We started research involving classical instruments, bowed instruments and the grand piano to find out how these instruments actually worked,” he explains. “In this way, we could design the final mics for these instruments. “We got in touch with instrument builders, artists and sound engineers to gather

info regarding each instrument and how the artist and sound engineers actually experienced their sound. We also worked closely together with worldfamous Danish jazz pianist Niels Lan Doky in the process designing the first prototype of the P6000 microphone for grand piano. Finally, after thousand of hours of research, we came up with some good results.” Those good results are currently available for classical bowed string instruments (although Larsen says “pop, rock and heavy metal bands [already] use our mics” onstage for bowed instruments), but the company recently announced the launch of prototypes of drum and brass/woodwind mics, on sale in Q1 2015, and a vocal mic is “in progress”. Dealers in Denmark can order Remic products through

its Danish distributor, Alfa Audio, while customers in the rest of Europe and the US can buy direct from Remic. (Larsen is, however, positive about the company’s fledgling “connections with stores in the UK, [Republic of] Ireland and Sweden”.) So, that’s Remic, then – another innovative manufacturer spawned by a country that seems to be a breeding ground for microphone companies. Is it something in the water? “It’s definitely in the water – in the water of the Danish beer!” laughs Larsen. “No, we have a long tradition of developing audio, [with] companies like B&amp;O, Brüel &amp; Kjær, Lyngdorf Audio, Wilson Pickups and more, so maybe it’s in our genes!” Q www.remic.dk www.alfaaudio.dk

The business of professional audio