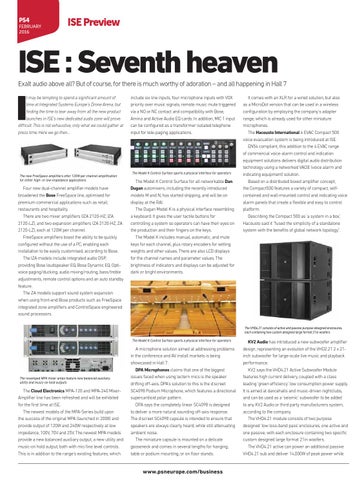 ISE : Seventh heaven Exalt audio above all? But of course, for there is much worthy of adoration – and all happening in Hall 7

t may be tempting to spend a signiﬁcant amount of time at Integrated Systems Europe’s Drone Arena, but ﬁnding the time to tear away from all the new product launches in ISE’s new dedicated audio zone will prove difficult. This is not exhaustive, only what we could gather at press time. Here we go then…

include six line inputs, four microphone inputs with VOX priority over music signals, remote music mute triggered via a NO or NC contact and compatibility with Bose, Amina and Active Audio EQ cards. In addition, MIC 1 input can be conﬁgured as a transformer isolated telephone input for tele-paging applications.

The Model K Control Surface for all networkable Dan Dugan automixers, including the recently introduced models M and N, has started shipping, and will be on display at the RAI. The Dugan Model K is a physical interface resembling a keyboard. It gives the user tactile buttons for controlling a system so operators can have their eyes on the production and their ﬁngers on the keys. The Model K includes manual, automatic, and mute keys for each channel, plus rotary encoders for setting weights and other values. There are also LCD displays for the channel names and parameter values. The brightness of indicators and displays can be adjusted for dark or bright environments.

It comes with an XLR for a wired solution, but also as a MicroDot version that can be used in a wireless conﬁguration by employing the company’s adapter range, which is already used for other miniature microphones. The Hacousto International 4 EVAC Compact 500 voice evacuation system is being introduced at ISE. EN54 compliant, this addition to the 4 EVAC range of commercial voice-alarm control and indication equipment solutions delivers digital audio distribution technology using a networked VACIE (voice alarm and indicating equipment) solution. Based on a distributed boxed ampliﬁer concept, the Compact500 features a variety of compact, selfcontained and wall-mounted control and indicating voice alarm panels that create a ﬂexible and easy to control platform. Describing the Compact 500 as ‘a system in a box’, Hacousto said it “fused the simplicity of a standalone system with the beneﬁts of global network topology”.

The Cloud Electronics MPA-120 and MPA-240 MixerAmpliﬁer line has been refreshed and will be exhibited for the ﬁrst time at ISE. The newest models of the MPA-Series build upon the success of the original MPA (launched in 2008) and provide output of 120W and 240W respectively at low impedance, 100V, 70V and 25V. The newest MPA models provide a new balanced auxiliary output, a new utility and music-on hold output, both with mic/line level controls. This is in addition to the range’s existing features, which

A microphone solution aimed at addressing problems in the conference and AV install markets is being showcased in Hall 7. DPA Microphones claims that one of the biggest issues faced when using lectern mics is the speaker drifting off-axis. DPA’s solution to this is the d:screet SC4098 Podium Microphone, which features a directional supercardioid polar pattern. DPA says the completely linear SC4098 is designed to deliver a more natural sounding off-axis response. The d:screet SC4098 capsule is intended to ensure that speakers are always clearly heard, while still attenuating ambient noise. The miniature capsule is mounted on a delicate gooseneck and comes in several lengths for hanging, table or podium mounting, or on ﬂoor stands.

KV2 Audio has introduced a new subwoofer ampliﬁer design, representing an evolution of the VHD2.21 2 x 21inch subwoofer for large-scale live music and playback performance. KV2 says the VHD4.21 Active Subwoofer Module features high current delivery, coupled with a class leading ‘green efficiency’ low consumption power supply. It is aimed at dancehalls and music-driven nightclubs, and can be used as a ‘seismic’ subwoofer to be added to any KV2 Audio or third party manufacturers system, according to the company. The VHD4.21 module consists of two purpose designed ‘low loss-band pass’ enclosures, one active and one passive, with each enclosure containing two speciﬁc custom designed large format 21in woofers. The VHD4.21 active can power an additional passive VHD4.21 sub and deliver 14,000W of peak power while