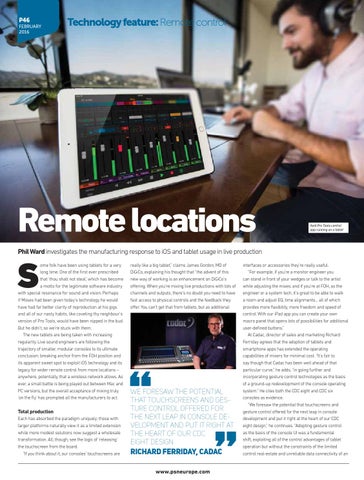 ome folk have been using tablets for a very long time. One of the ﬁrst ever prescribed that ‘thou shalt not steal’, which has become a motto for the legitimate software industry with special resonance for sound and vision. Perhaps if Moses had been given today’s technology he would have had far better clarity of reproduction at his gigs and all of our nasty habits, like coveting thy neighbour’s version of Pro Tools, would have been nipped in the bud. But he didn’t, so we’re stuck with them. The new tablets are being taken with increasing regularity. Live sound engineers are following the trajectory of smaller, modular consoles to its ultimate conclusion: breaking anchor from the FOH position and its apparent sweet spot to exploit iOS technology and its legacy for wider remote control from more locations – anywhere, potentially, that a wireless network allows. As ever, a small battle is being played out between Mac and PC versions, but the overall acceptance of mixing truly ‘on the ﬂy’ has prompted all the manufacturers to act.

Total production Each has absorbed the paradigm uniquely; those with larger platforms naturally view it as a limited extension while more modest solutions now suggest a wholesale transformation. All, though, see the logic of ‘releasing’ the touchscreen from the board. “If you think about it, our consoles’ touchscreens are

really like a big tablet,” claims James Gordon, MD of DiGiCo, explaining his thought that “the advent of this new way of working is an enhancement on DiGiCo’s offering. When you’re mixing live productions with lots of channels and outputs, there’s no doubt you need to have fast access to physical controls and the feedback they offer. You can’t get that from tablets, but as additional

interfaces or accessories they’re really useful. “For example, if you’re a monitor engineer you can stand in front of your wedges or talk to the artist while adjusting the mixes; and if you’re at FOH, as the engineer or a system tech, it’s great to be able to walk a room and adjust EQ, time alignments... all of which provides more ﬂexibility, more freedom and speed of control. With our iPad app you can create your own macro panel that opens lots of possibilities for additional user-deﬁned buttons.” At Cadac, director of sales and marketing Richard Ferriday agrees that the adoption of tablets and smartphone apps has extended the operating capabilities of mixers for minimal cost. “It’s fair to say though that Cadac has been well ahead of that particular curve,” he adds, “in going further and incorporating gesture control technologies as the basis of a ground-up redevelopment of the console operating system.” He cites both the CDC eight and CDC six consoles as evidence. “We foresaw the potential that touchscreens and gesture control offered for the next leap in console development and put it right at the heart of our CDC eight design,” he continues. “Adopting gesture control as the basis of the console UI was a fundamental shift, exploiting all of the control advantages of tablet operation but without the constraints of the limited control real-estate and unreliable data connectivity of an