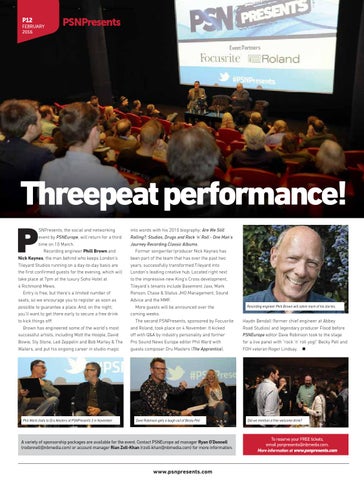 Threepeat performance! P SNPresents, the social and networking event by PSNEurope, will return for a third time on 10 March. Recording engineer Phill Brown and Nick Keynes, the man behind who keeps London’s Tileyard Studios running on a day-to-day basis are the ﬁrst conﬁrmed guests for the evening, which will take place at 7pm at the luxury Soho Hotel at 4 Richmond Mews. Entry is free, but there’s a limited number of seats, so we encourage you to register as soon as possible to guarantee a place. And, on the night, you’ll want to get there early to secure a free drink to kick things off! Brown has engineered some of the world’s most successful artists, including Mott the Hoople, David Bowie, Sly Stone, Led Zeppelin and Bob Marley & The Wailers, and put his ongoing career in studio magic

Phil Ward chats to Dru Masters at PSNPresents 3 in November

into words with his 2010 biography: Are We Still Rolling?: Studios, Drugs and Rock ‘n’ Roll - One Man’s Journey Recording Classic Albums. Former songwriter/producer Nick Keynes has been part of the team that has over the past two years, successfully transformed Tileyard into London’s leading creative hub. Located right next to the impressive new King’s Cross development, Tileyard’s tenants include Basement Jaxx, Mark Ronson, Chase & Status JHO Management, Sound Advice and the MMF. More guests will be announced over the coming weeks. The second PSNPresents, sponsored by Focusrite and Roland, took place on 4 November. It kicked off with Q&A by industry personality and former Pro Sound News Europe editor Phil Ward with guests composer Dru Masters (The Apprentice),

Dave Robinson gets a laugh out of Becky Pell

Recording engineer Phill Brown will sahre more of his stories.

Did we mention a free welcome drink?