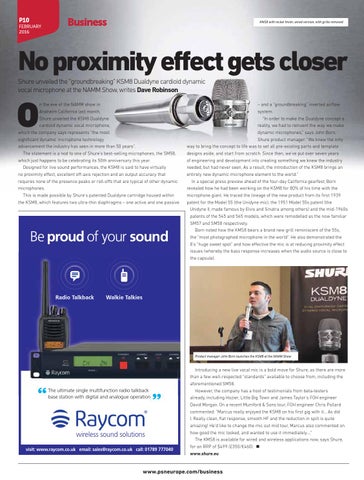 n the eve of the NAMM show in Anaheim California last month, Shure unveiled the KSM8 Dualdyne cardioid dynamic vocal microphone, which the company says represents “the most signiﬁcant dynamic microphone technology advancement the industry has seen in more than 50 years”. The statement is a nod to one of Shure’s best-selling microphones, the SM58, which just happens to be celebrating its 50th anniversary this year. Designed for live sound performances, the KSM8 is said to have virtually no proximity effect, excellent off-axis rejection and an output accuracy that requires none of the presence peaks or roll-offs that are typical of other dynamic microphones. This is made possible by Shure’s patented Dualdyne cartridge housed within the KSM8, which features two ultra-thin diaphragms – one active and one passive

Be proud of your sound

– and a “groundbreaking” inverted airﬂow system. “In order to make the Dualdyne concept a reality, we had to reinvent the way we make dynamic microphones,” says John Born, Shure product manager. “We knew the only way to bring the concept to life was to set all pre-existing parts and template designs aside, and start from scratch. Since then, we’ve put over seven years of engineering and development into creating something we knew the industry needed, but had never seen. As a result, the introduction of the KSM8 brings an entirely new dynamic microphone element to the world.” In a special press preview ahead of the four-day California gearfest, Born revealed how he had been working on the KSM8 for 80% of his time with the microphone giant. He traced the lineage of the new product from its ﬁrst 1939 patent for the Model 55 (the Unidyne mic), the 1951 Model 55s patent (the Unidyne II, made famous by Elvis and Sinatra among others) and the mid-1960s patents of the 545 and 565 models, which were remodelled as the now familiar SM57 and SM58 respectively. Born noted how the KMS8 bears a brand new grill reminiscent of the 55s, the “most photographed microphone in the world”. He also demonstrated the 8’s “huge sweet spot” and how effective the mic is at reducing proximity effect issues (whereby the bass response increases when the audio source is close to the capsule).

Introducing a new live vocal mic is a bold move for Shure, as there are more than a few well-respected “standards” available to choose from, including the aforementioned SM58. However, the company has a host of testimonials from beta-testers already, including Hozier, Little Big Town and James Taylor’s FOH engineer David Morgan. On a recent Mumford & Sons tour, FOH engineer Chris Pollard commented: “Marcus really enjoyed the KSM8 on his ﬁrst gig with it... As did I. Really clean, ﬂat response, smooth HF and the reduction in spill is quite amazing! He’d like to change the mic out mid tour, Marcus also commented on how good the mic looked, and wanted to use it immediately....” The KMS8 is available for wired and wireless applications now, says Shure, for an RRP of $499 (£350/€460).   www.shure.eu