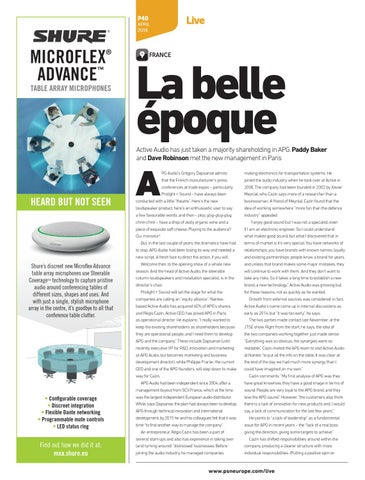 HEARD BUT NOT SEEN

Find out how we did it at: mxa.shure.eu

PG Audio’s Grégory Dapsanse admits that the French manufacturer’s press conferences at trade expos – particularly Prolight + Sound – have always been conducted with a little “theatre”. Here’s the new loudspeaker product, here’s an enthusiastic user to say a few favourable words, and then – plop, glug-glug-glug, chink-chink – have a drop of zesty organic wine and a piece of exquisite soft cheese. Playing to the audience? Oui, monsieur! But, in the last couple of years, the dramatics have had to stop. APG Audio had been losing its way and needed a new script. A fresh face to direct the action, if you will. Welcome then, to the opening show of a whole new season. And the head of Active Audio, the steerable column loudspeakers and installation specialist, is in the director’s chair. Prolight + Sound will set the stage for what the companies are calling an “equity alliance”: Nantesbased Active Audio has acquired 60% of APG’s shares, and Régis Cazin, Active CEO, has joined APG in Paris as operational director. He explains: “I really wanted to keep the existing shareholders as shareholders because they are operational people, and I need them to develop APG and the company.” These include Dapsanse (until recently executive VP for R&D, innovation and marketing at APG Audio, but becomes marketing and business development director), while Philippe Frarier, the current CEO and one of the APG founders, will step down to make way for Cazin. APG Audio had been independent since 2004, after a management buyout from SCV France, which at the time was the largest independent European audio distributor. While, says Dapsanse, the plan had always been to develop APG through technical innovation and international development, by 2015 he and his colleagues felt that it was time “to find another way to manage the company”. An entrepreneur, Régis Cazin has been a part of several start-ups and also has experience in taking over (and turning around) “distressed’ businesses. Before joining the audio industry, he managed companies

making electronics for transportation systems. He joined the audio industry when he took over at Active in 2008. The company had been founded in 2002 by Xavier Meynial, who Cazin says more of a researcher than a businessman. A friend of Meynial, Cazin found that the idea of working somewhere “more fun than the defence industry” appealed. “I enjoy good sound but I was not a specialist, even if I am an electronic engineer. So I could understand what makes good sound, but what I discovered that in terms of market is it’s very special. You have networks of relationships, you have brands with known names, loyalty and existing partnerships: people know a brand for years, and unless that brand makes some major mistakes, they will continue to work with them. And they don’t want to take any risks. So it takes a long time to establish a new brand, a new technology.” Active Audio was growing but, for these reasons, not as quickly as he wanted. Growth from external sources was considered: in fact, Active Audio’s name came up in internal discussions as early as 2014, but “it was too early,” he says. The two parties made contact last November, at the JTSE show. Right from the start, he says, the idea of the two companies working together just made sense: “Everything was so obvious, the synergies were so readable.” Cazin invited the APG team to visit Active Audio at Nantes “to put all the info on the table. It was clear at the end of the day we had much more synergy than I could have imagined on my own.” Cazin comments: “My ﬁrst analysis of APG was they have great knowhow, they have a good image in terms of sound. People are very loyal to the APG brand, and they love the APG sound.” However, “the customers also think there is a lack of innovation for new products and, I would say, a lack of communication for the last few years.” He points to “a lack of leadership” as a fundamental issue for APG in recent years – the “lack of a real boss giving the direction, giving some targets to achieve”. Cazin has shifted responsibilities around within the company, producing a clearer structure with more individual responsibilities. (Putting a positive spin on