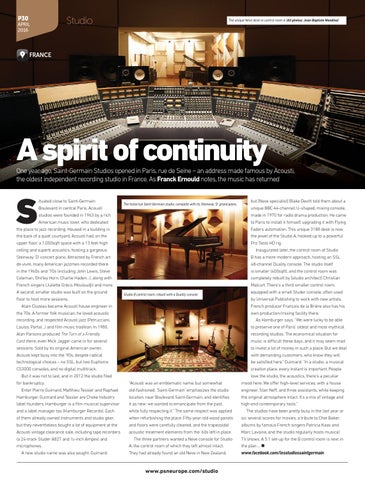 The unique Neve desk in control room A (All photos: Jean-Baptiste Mondino)

A spirit of continuity One year ago, Saint-Germain Studios opened in Paris, rue de Seine – an address made famous by Acousti, the oldest independent recording studio in France. As Franck Ernould notes, the music has returned

ituated close to Saint-Germain Boulevard in central Paris, Acousti studios were founded in 1963 by a rich American music lover, who dedicated the place to jazz recording. Housed in a building in the back of a quiet courtyard, Acousti had, on the upper ﬂoor, a 1,000sqft space with a 13 feet-high ceiling and superb acoustics, hosting a gorgeous Steinway ‘D’ concert piano. Attracted by French art de vivre, many American jazzmen recorded there in the 1960s and ‘70s (including John Lewis, Steve Coleman, Shirley Horn, Charlie Haden…), along with French singers (Juliette Gréco, Mouloudji) and more. A second, smaller studio was built on the ground ﬂoor to host more sessions. Alain Cluzeau became Acousti house engineer in the 70s. A former folk musician, he loved acoustic recording, and respected Acousti jazz (Petrucciani, Louiss, Portal…) and ﬁlm music tradition. In 1980, Alan Parsons produced The Turn of a Friendly Card there; even Mick Jagger came in for several sessions. Sold by its original American owner, Acousti kept busy into the ‘90s, despite radical technological choices – no SSL, but two Euphonix CS3000 consoles, and no digital multitrack. But it was not to last, and in 2012 the studio ﬁled for bankruptcy. Enter Pierre Guimard, Matthieu Tessier and Raphael Hamburger. Guimard and Tessier are Choke Industry label founders; Hamburger is a ﬁlm musical supervisor and a label manager too (Hamburger Records). Each of them already owned instruments and studio gear, but they nevertheless bought a lot of equipment at the Acousti vintage clearance sale, including tape recorders (a 24-track Studer A827 and ½-inch Ampex) and microphones. A new studio name was also sought. Guimard:

Studio B control room, rebuilt with a Duality console

“Acousti was an emblematic name, but somewhat old-fashioned. ‘Saint-Germain’ emphasizes the studio location, near Boulevard Saint-Germain, and identiﬁes it as new: we wanted to emancipate from the past, while fully respecting it.” The same respect was applied when refurbishing the place. Fifty-year-old wood panels and ﬂoors were carefully cleaned, and the trapezoidal acoustic treatment elements from the ‘60s left in place. The three partners wanted a Neve console for Studio A, the control room of which they left almost intact. They had already found an old Neve in New Zealand,

but [Neve specialist] Blake Devitt told them about a unique BBC 44-channel, U-shaped, mixing console, made in 1970 for radio drama production. He came to Paris to install it himself, upgrading it with Flying Faders automation. This unique 3188 desk is now the jewel of the Studio A, hooked up to a powerful Pro Tools HD rig. Inaugurated later, the control room of Studio B has a more modern approach, hosting an SSL 48-channel Duality console. The studio itself is smaller (400sqft), and the control room was completely rebuilt by [studio architect] Christian Malcurt. There’s a third smaller control room, equipped with a small Studer console, often used by Universal Publishing to work with new artists. French producer François de la Brière also has his own production/mixing facility there. As Hamburger says, “We were lucky to be able to preserve one of Paris’ oldest and most mythical recording studios. The economical situation for music is difficult these days, and it may seem mad to invest a lot of money in such a place. But we deal with demanding customers, who know they will be satisﬁed here.” Guimard: “In a studio, a musical creation place, every instant is important. People love the studio, the acoustics, there’s a peculiar mood here. We offer high-level services, with a house engineer, Stan Neff, and three assistants, while keeping the original atmosphere intact. It’s a mix of vintage and high-end contemporary tools.” The studios have been pretty busy in the last year or so: several scores for movies, a tribute to Chet Baker, albums by famous French singers Patricia Kaas and Marc Lavoine, and the studio regularly hosts musical TV shows. A 5.1 set-up for the B control room is next in the plan….   www.facebook.com/lesstudiossaintgermain