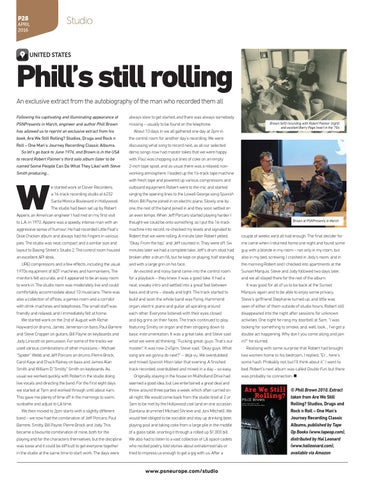 Phill’s still rolling An exclusive extract from the autobiography of the man who recorded them all Following his captivating and illuminating appearance at PSNPresents in March, engineer and author Phill Brown has allowed us to reprint an exclusive extract from his book, Are We Still Rolling? Studios, Drugs and Rock n Roll – One Man’s Journey Recording Classic Albums. So let’s go back to June 1976, and Brown is in the USA to record Robert Palmer’s third solo album (later to be named Some People Can Do What They Like) with Steve Smith producing…

e started work at Clover Recorders, a 16-track recording studio at 6232 Santa Monica Boulevard in Hollywood. The studio had been set up by Robert Appere, an American engineer I had met on my ﬁrst visit to L.A. in 1972. Appere was a speedy, intense man with an aggressive sense of humour. He had recorded Little Feat’s Dixie Chicken album and always had his ﬁngers in various pies. The studio was neat, compact and a similar size and layout to Basing Street’s Studio 2. The control room housed an excellent API desk, UREI compressors and a few effects, including the usual 1970s equipment of ADT machines and harmonisers. The monitors felt accurate, and it appeared to be an easy room to work in. The studio room was moderately live and could comfortably accommodate about 10 musicians. There was also a collection of offices, a games room and a corridor with drink machines and telephones. The small staff was friendly and relaxed, and I immediately felt at home. We started work on the 2nd of August with Richie Hayward on drums, James Jamerson on bass, Paul Barrere and Steve Cropper on guitars, Bill Payne on keyboards and Jody Linscott on percussion. For some of the tracks we used various combinations of other musicians – Michael “Spider” Webb and Jeff Porcaro on drums, Pierre Brock, Carol Kaye and Chuck Rainey on bass and James Alan Smith and William D “Smitty” Smith on keyboards. As usual we worked quickly, with Robert in the studio doing live vocals and directing the band. For the ﬁrst eight days we started at 7pm and worked through until about 4am. This gave me plenty of time off in the mornings to swim, sunbathe and adjust to LA time. We then moved to 2pm starts with a slightly different band – we now had the combination of Jeff Porcaro, Paul Barrere, Smitty, Bill Payne, Pierre Brock and Jody. This became a favourite combination of mine, both for the playing and for the characters themselves, but the discipline was loose and it could be difficult to get everyone together in the studio at the same time to start work. The days were

always slow to get started, and there was always somebody missing – usually to be found on the telephone. About 10 days in we all gathered one day at 2pm in the control room for another day’s recording. We were discussing what song to record next, as all our selected demo songs now had master takes that we were happy with. Paul was chopping out lines of coke on an empty 2-inch tape spool, and as usual there was a relaxed, nonworking atmosphere. I loaded up the 16-track tape machine with fresh tape and powered up various compressors and outboard equipment. Robert went to the mic and started singing the opening lines to the Lowell George song Spanish Moon. Bill Payne joined in on electric piano. Slowly, one by one, the rest of the band joined in and they soon settled on an even tempo. When Jeff Porcaro started playing harder I thought we could be onto something, so I put the 16-track machine into record, re-checked my levels and signaled to Robert that we were rolling. A minute later Robert yelled, “Okay. From the top,” and Jeff counted in. They were off. Six minutes later we had a complete take. Jeff’s drum stool had broken after a drum ﬁll, but he kept on playing, half standing and with a large grin on his face. An excited and noisy band came into the control room for a playback – they knew it was a good take. It had a neat, sneaky intro and settled into a great feel between bass and drums – steady and tight. The track started to build and soon the whole band was ﬂying, Hammond organ, electric piano and guitar all spiraling around each other. Everyone listened with their eyes closed and big grins on their faces. The track continued to play, featuring Smitty on organ and then stripping down to basic instrumentation. It was a great take, and Steve said what we were all thinking, “Fucking great, guys. That’s our master.” It was now 2:45pm. Steve said, “Okay guys. What song are we gonna do next?” – déjà vu. We overdubbed and mixed Spanish Moon later that evening. A ﬁnished track recorded, overdubbed and mixed in a day – so easy. Originally, staying in the house on Mulholland Drive had seemed a good idea, but Lee entertained a great deal and threw around three parties a week, which often carried on all night. We would come back from the studio tired at 2 or 3am to be met by the Hollywood cool (and on one occasion [Santana drummer] Michael Shrieve and Joni Mitchell). We would feel obliged to be sociable and stay up drinking beer, playing pool and taking coke from a large pile in the middle of a glass table, snorting it through a rolled up $1,000 bill. We also had to listen to a vast collection of LA space cadets who recited poetry, told stories about extraterrestrials or tried to impress us enough to get a gig with us. After a

Brown at PSNPresents in March

couple of weeks we’d all had enough. The ﬁnal decider for me came when I returned home one night and found some guy with a blonde in my room – not only in my room, but also in my bed, screwing. I crashed in Jody’s room, and in the morning Robert and I checked into apartments at the Sunset Marquis. Steve and Jody followed two days later, and we all stayed there for the rest of the album. It was good for all of us to be back at the Sunset Marquis again and to be able to enjoy some privacy. Steve’s girlfriend Stephanie turned up, and little was seen of either of them outside of studio hours. Robert still disappeared into the night after sessions for unknown activities. One night he rang my doorbell at 5am. “I was looking for something to smoke, and, well, look… I’ve got a double act happening. Why don’t you come along and join in?” he slurred. Realising with some surprise that Robert had brought two women home to his bedroom, I replied, “Er… here’s some hash. Probably not, but I’ll think about it.” I went to bed. Robert’s next album was called Double Fun, but there was probably no connection.