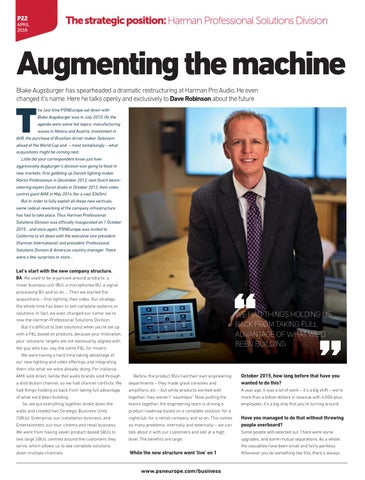 Augmenting the machine Blake Augsburger has spearheaded a dramatic restructuring at Harman Pro Audio. He even changed it’s name. Here he talks openly and exclusively to Dave Robinson about the future

he last time PSNEurope sat down with Blake Augsburger was in July 2010. On the agenda were some hot topics: manufacturing issues in Mexico and Austria, investment in AVB, the purchase of Brazilian driver maker Selenium ahead of the World Cup and – most tantalisingly – what acquisitions might be coming next. Little did your correspondent know just how aggressively Augburger’s division was going to feast in new markets: ﬁrst gobbling up Danish lighting maker Martin Professional in December 2012, next Dutch beamsteering expert Duran Audio in October 2013, then video control giant AMX in May 2014 (for a cool $365m). But in order to fully exploit all these new verticals, some radical reworking of the company infrastructure has had to take place. Thus Harman Professional Solutions Division was officially inaugurated on 1 October 2015… and once again, PSNEurope was invited to California to sit down with the executive vice president (Harman International) and president, Professional Solutions Division & Americas country manager. There were a few surprises in store…

Let’s start with the new company structure. BA: We used to be organised around products: a mixer business unit (BU), a microphones BU, a signal processing BU and so on … Then we started the acquisitions – ﬁrst lighting, then video. Our strategy the whole time has been to sell complete systems or solutions. In fact, we even changed our name: we’re now the Harman Professional Solutions Division. But it’s difficult to [sell solutions] when you’re set up with a P&L based on products, because your motivation, your ‘solutions’ targets are not necessarily aligned with the guy who has, say, the same P&L for mixers. We were having a hard time taking advantage of our new lighting and video offerings and integrating them into what we were already doing. For instance, AMX sold direct, [while the] audio brands sold through a distribution channel, so we had channel conﬂicts. We had things holding us back from taking full advantage of what we’d been building. So, we put everything together, broke down the walls and created two Strategic Business Units (SBUs): Enterprise, our installation business, and Entertainment, our tour, cinema and retail business. We went from having seven product-based SBUs to two large SBUs, centred around the customers they serve, which allows us to see complete solutions down multiple channels.

Before, the product BUs had their own engineering departments – they made great consoles and ampliﬁers, etc – but while products worked well together, they weren’t “seamless”. Now, putting the teams together, the engineering team is driving a product roadmap based on a complete solution: for a nightclub, for a rental company and so on. This solves so many problems, internally and externally – we can talk about it with our customers and sell at a high level. The beneﬁts are large.

While the new structure went ‘live’ on 1

October 2015, how long before that have you wanted to do this? A year ago. It was a lot of work – it’s a big shift – we’re more than a billion dollars in revenue with 4,000-plus employees, it’s a big ship that you’re turning around.

Have you managed to do that without throwing people overboard? Some people self-selected out. There were some upgrades, and some mutual separations. As a whole, the casualties have been small and fairly painless. Whenever you do something like this, there’s always