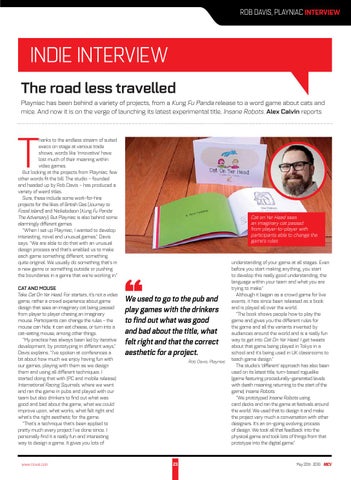 INDIE INTERVIEW The road less travelled Playniac has been behind a variety of projects, from a Kung Fu Panda release to a word game about cats and mice. And now it is on the verge of launching its latest experimental title, Insane Robots. Alex Calvin reports

hanks to the endless stream of suited execs on stage at various trade shows, words like ‘innovative’ have lost much of their meaning within video games. But looking at the projects from Playniac, few other words fit the bill. The studio – founded and headed up by Rob Davis – has produced a variety of weird titles. Sure, these include some work-for-hire projects for the likes of British Gas (Journey to Fossil Island) and Nickelodeon (Kung Fu Panda: The Adversary). But Playniac is also behind some alarmingly different games. “When I set up Playniac, I wanted to develop interesting, novel and unusual games,” Davis says. “We are able to do that with an unusual design process and that’s enabled us to make each game something different, something quite original. We usually do something that’s in a new genre or something outside or pushing the boundaries in a genre that we’re working in.” CAT AND MOUSE Take Cat On Yer Head. For starters, it’s not a video game, rather a crowd experience about game design that sees an imaginary cat being passed from player to player chasing an imaginary mouse. Participants can change the rules – the mouse can hide, it can eat cheese, or turn into a cat-eating mouse, among other things. “My practice has always been led by iterative development, by prototyping in different ways,” Davis explains. “I’ve spoken at conferences a bit about how much we enjoy having fun with our games, playing with them as we design them and using all different techniques. I started doing that with [PC and mobile release] International Racing Squirrels, where we went and ran the game in pubs and played with our team but also drinkers to find out what was good and bad about the game, what we could improve upon, what works, what felt right and what’s the right aesthetic for the game. “That’s a technique that’s been applied to pretty much every project I’ve done since. I personally find it a really fun and interesting way to design a game. It gives you lots of

We used to go to the pub and play games with the drinkers to find out what was good and bad about the title, what felt right and that the correct aesthetic for a project. Rob Davis, Playniac

understanding of your game at all stages. Even before you start making anything, you start to develop this really good understanding, the language within your team and what you are trying to make.” Although it began as a crowd game for live events, it has since been released as a book and is played all over the world. “The book shows people how to play the game and gives you the different rules for the game and all the variants invented by audiences around the world and is a really fun way to get into Cat On Yer Head. I get tweets about that game being played in Tokyo in a school and it’s being used in UK classrooms to teach game design.” The studio’s ‘different’ approach has also been used on its latest title, turn-based roguelike [game featuring procedurally-generated levels with death meaning returning to the start of the game] Insane Robots. “We prototyped Insane Robots using card decks and ran the game at festivals around the world. We used that to design it and make the project very much a conversation with other designers. It’s an on-going evolving process of design. We took all that feedback into the physical game and took lots of things from that prototype into the digital game.”