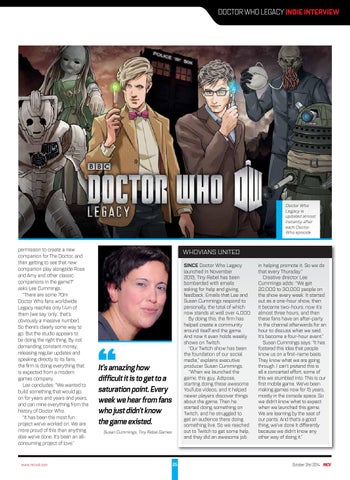 permission to create a new companion for The Doctor, and then getting to see that new companion play alongside Rose and Amy and other classic companions in the game?” asks Lee Cummings. “There are some 70m Doctor Who fans worldwide. Legacy reaches only 1.4m of them (we say ‘only’, that’s obviously a massive number). So there’s clearly some way to go. But the studio appears to be doing the right thing. By not demanding constant money, releasing regular updates and speaking directly to its fans, the firm is doing everything that is expected from a modern games company. Lee concludes: “We wanted to build something that would go on for years and years and years, and can mine everything from the history of Doctor Who. “It has been the most fun project we’ve worked on. We are more proud of this than anything else we’ve done. It’s been an allconsuming project of love.”

WHOVIANS UNITED SINCE Doctor Who Legacy launched in November 2013, Tiny Rebel has been bombarded with emails asking for help and giving feedback. Emails that Lee and Susan Cummings respond to personally, the total of which now stands at well over 4,000. By doing this, the firm has helped create a community around itself and the game. And now it even holds weekly shows on Twitch. “Our Twitch show has been the foundation of our social media,” explains executive producer Susan Cummings. “When we launched the game, this guy, Adipose, starting doing these awesome YouTube videos, and it helped newer players discover things about the game. Then he started doing something on Twitch, and he struggled to get an audience there doing something live. So we reached out to Twitch to get some help, and they did an awesome job

It’s amazing how difficult it is to get to a saturation point. Every week we hear from fans who just didn’t know the game existed. Susan Cummings, Tiny Rebel Games

in helping promote it. So we do that every Thursday.” Creative director Lee Cummings adds: “We get 20,000 to 30,000 people on the show every week. It started out as a one-hour show, then it became two-hours, now it’s almost three hours, and then these fans have an after-party in the channel afterwards for an hour to discuss what we said. It’s become a four-hour event.” Susan Cummings says: “It has fostered this idea that people know us on a first-name basis. They know what we are going through. I can’t pretend this is all a concerted effort; some of this we stumbled into. This is our first mobile game. We’ve been making games now for 15 years, mostly in the console space. So we didn’t know what to expect when we launched this game. We are learning by the seat of our pants. And that’s a good thing; we’ve done it differently because we didn’t know any other way of doing it.”