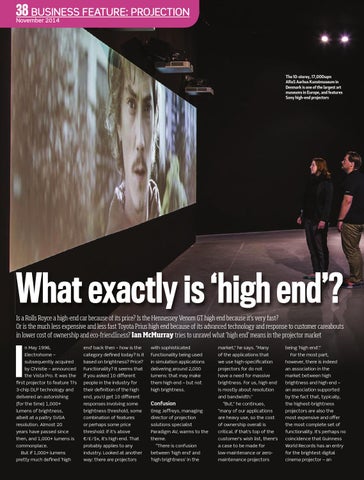 The 10-storey, 17,000sqm ARoS Aarhus Kunstmuseum in Denmark is one of the largest art museums in Europe, and features Sony high-end projectors

What exactly is ‘high end’? Is a Rolls Royce a high-end car because of its price? Is the Hennessey Venom GT high end because it’s very fast? Or is the much less expensive and less fast Toyota Prius high end because of its advanced technology and response to customer careabouts in lower cost of ownership and eco-friendliness? Ian McMurray tries to unravel what ‘high end’ means in the projector market

n May 1996, Electrohome – subsequently acquired by Christie – announced the Vista Pro. It was the first projector to feature TI’s 3-chip DLP technology and delivered an astonishing (for the time) 1,000+ lumens of brightness, albeit at a paltry SVGA resolution. Almost 20 years have passed since then, and 1,000+ lumens is commonplace. But if 1,000+ lumens pretty much defined ‘high

end’ back then – how is the category defined today? Is it based on brightness? Price? Functionality? It seems that if you asked 10 different people in the industry for their definition of the high end, you’d get 10 different responses involving some brightness threshold, some combination of features or perhaps some price threshold: if it’s above €/£/$x, it’s high end. That probably applies to any industry. Looked at another way: there are projectors

with sophisticated functionality being used in simulation applications delivering around 2,000 lumens: that may make them high end – but not high brightness.

Confusion Greg Jeffreys, managing director of projection solutions specialist Paradigm AV, warms to the theme. “There is confusion between ‘high end’ and ‘high brightness’ in the

market,” he says. “Many of the applications that we use high-specification projectors for do not have a need for massive brightness. For us, high end is mostly about resolution and bandwidth.” “But,” he continues, “many of our applications are heavy use, so the cost of ownership overall is critical. If that’s top of the customer’s wish list, there’s a case to be made for low-maintenance or zeromaintenance projectors

being ‘high end’.” For the most part, however, there is indeed an association in the market between high brightness and high end – an association supported by the fact that, typically, the highest-brightness projectors are also the most expensive and offer the most complete set of functionality. It’s perhaps no coincidence that Guinness World Records has an entry for the brightest digital cinema projector – an