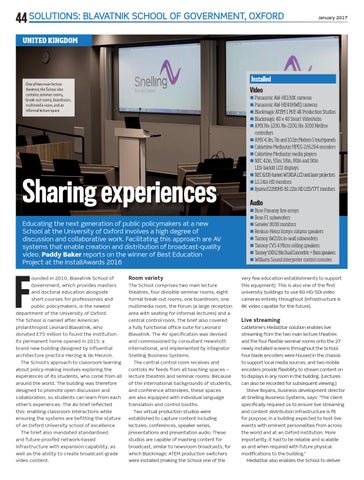 Sharing experiences Educating the next generation of public policymakers at a new School at the University of Oxford involves a high degree of discussion and collaborative work. Facilitating this approach are AV systems that enable creation and distribution of broadcast-quality video. Paddy Baker reports on the winner of Best Education Project at the InstallAwards 2016

ounded in 2010, Blavatnik School of Government, which provides masters and doctoral education alongside short courses for professionals and public policymakers, is the newest department of the University of Oxford. The School is named after American philanthropist Leonard Blavatnik, who donated £75 million to found the institution. Its permanent home opened in 2015: a brand new building designed by influential architecture practice Herzog &amp; de Meuron. The School’s approach to classroom learning about policy-making involves exploring the experiences of its students, who come from all around the world. The building was therefore designed to promote open discussion and collaboration, so students can learn from each other’s experiences. The AV brief reflected this: enabling classroom interactions while ensuring the systems are befitting the stature of an Oxford University school of excellence. The brief also mandated standardised and future-proofed network-based infrastructure with expansion capability, as well as the ability to create broadcast-grade video content.

Room variety The School comprises two main lecture theatres, four divisible seminar rooms, eight formal break-out rooms, one boardroom, one multimedia room, the Forum (a large reception area with seating for informal lectures) and a central control room. The brief also covered a fully functional office suite for Leonard Blavatnik. The AV specification was devised and commissioned by consultant Hewshott International, and implemented by integrator Snelling Business Systems. The central control room receives and controls AV feeds from all teaching spaces – lecture theatres and seminar rooms. Because of the international backgrounds of students, and conference attendees, these spaces are also equipped with individual language translation and control booths. Two virtual production studios were established to capture content including lectures, conferences, speaker series, presentations and presentation audio. These studios are capable of mashing content for broadcast, similar to newsroom broadcasts, for which Blackmagic ATEM production switchers were installed (making the School one of the

very few education establishments to support this equipment). This is also one of the ﬁrst university buildings to use 6G HD/SDI video cameras entirely throughout (infrastructure is 8K video capable for the future).

Live streaming Cabletime’s MediaStar solution enables live streaming from the two main lecture theatres and the four ﬂexible seminar rooms onto the 27 newly installed screens throughout the School. Four blade encoders were housed in the chassis to support local media sources, and two mobile encoders provide ﬂexibility to stream content on to displays in any room in the building. (Lectures can also be recorded for subsequent viewing.) Steve Royans, business development director at Snelling Business Systems, says: “The client speciﬁcally required us to ensure live streaming and content distribution infrastructure is ﬁt for purpose, in a building expected to host live events with eminent personalities from across the world and at an Oxford institution. More importantly, it had to be reliable and scalable as and when required with future physical modiﬁcations to the building.” MediaStar also enables the School to deliver