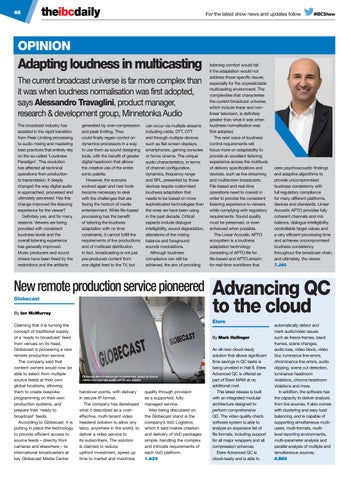 Adapting loudness in multicasting The current broadcast universe is far more complex than it was when loudness normalisation was first adopted, says Alessandro Travaglini, product manager, research &amp; development group, Minnetonka Audio The broadcast industry has assisted in the rapid transition from Peak Limiting processing to audio mixing and mastering best practices that entirely rely on the so-called ‘Loudness Paradigm’. This revolution has affected all technical operations from production to transmission. It deeply changed the way digital audio is approached, processed and ultimately perceived. Has this change improved the listening experience for the viewer? Definitely yes, and for many reasons. Viewers are being provided with consistent loudness levels and the overall listening experience has generally improved. Music producers and sound mixers have been freed by the restrictions and the artifacts

generated by over-compression and peak limiting. They could finally regain control on dynamics processors in a way to use them as sound designing tools, with the benefit of greater digital headroom that allows the creative use of the entire sonic palette. However, the scenario evolved again and new tools became necessary to deal with the challenges that are facing the horizon of media entertainment. While file-based processing has the benefit of tailoring the loudness adaptation with no time constraints, it cannot fulfill the requirements of live productions and of multicast distribution. In fact, broadcasting is not just pre-produced content from one digital feed to the TV, but

can occur via multiple streams including cable, DTT, OTT and through multiple devices such as flat-screen displays, smartphones, gaming consoles or home cinema. The unique audio characteristics, in terms of channel configuration, dynamics, frequency range and SPL, presented by those devices require customised loudness adaptation that needs to be based on more sophisticated technologies than the ones we have been using in the past decade. Critical aspects include dialogue intelligibility, sound degradation, alterations of the mixing balance and foreground sounds modulations. Although loudness compliance can still be achieved, the aim of providing

New remote production service pioneered Globecast By Ian McMurray Claiming that it is turning the concept of traditional supply of a ‘ready to broadcast’ feed from venues on its head, Globecast is pioneering a new remote production service. The company said that content owners would now be able to select from multiple source feeds at their own global locations, allowing them to create bespoke programming on their own production systems, and prepare their ‘ready to broadcast’ feeds. According to Globecast, it is putting in place the technology to provide efficient access to source feeds – directly from cameras and elsewhere – to international broadcasters at key Globecast Media Center

listening comfort would fail if the adaptation would not address those specific issues, especially for the unpredictable multicasting environment. The complexities that characterise the current broadcast universe, which include linear and nonlinear television, is definitely greater than what it was when loudness normalisation was first adopted. The next wave of loudness control requirements will focus more on adaptability to provide an excellent listening experience across the multitude of delivery specifications and devices, such as live streaming and multiscreen broadcasts. File-based and real-time operations need to coexist in order to provide the consistent listening experience to viewers while complying with regulatory requirements. Sound quality must be preserved, or even enhanced when possible. The Linear Acoustic APTO ecosystem is a loudness adaptation technology consisting of APTO.file for file-based and APTO.stream for real-time workflows that

Advancing QC to the cloud Etere By Mark Hallinger

Globecast aims to reduce upfront investment, speed up time to market and maximise quality with its new solution

handover points, with delivery in secure IP format. The company has developed what it described as a costeffective, multi-tenant video headend solution to allow any telco, anywhere in the world, to deliver a video service to its subscribers. The solution is claimed to reduce upfront investment, speed up time to market and maximise

quality through provision as a supported, fully managed service. Also being discussed on the Globecast stand is the company’s VoD Logistics, which it said makes creation and delivery of VoD packages simple, handling the complex and intricate requirements of each VoD platform. 1.A29

An all-new cloud-ready solution that allows significant time savings in QC tasks is being unveiled in Hall 8. Etere Advanced QC is offered as part of Etere MAM at no additional cost. This latest release is built with an integrated modular architecture designed to perform comprehensive QC. The video quality check software system is able to analyse an expansive list of file formats, including support for all major wrappers and all compression schemas. Etere Advanced QC is cloud-ready and is able to

The official newspaper of IBC2015