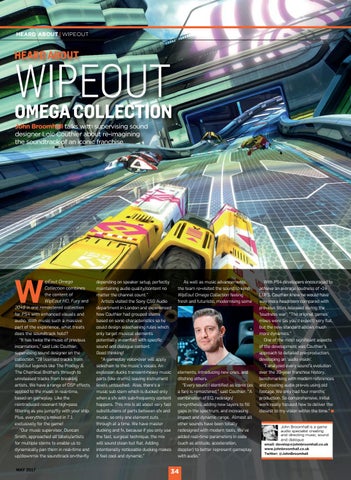 ipEout Omega Collection combines the content of WipEout HD, Fury and 2048 in one remastered collection for PS4 with enhanced visuals and audio. With music such a massive part of the experience, what treats does the soundtrack hold? “It has twice the music of previous incarnations,” said Loic Couthier, supervising sound designer on the collection. “28 licensed tracks from WipEout legends like The Prodigy &amp; The Chemical Brothers through to unreleased tracks from breaking artists. We have a range of DSP effects applied to the music in real-time, based on gameplay. Like the reintroduced resonant high-pass filtering as you jump/fly with your ship. Plus, everything’s mixed in 7.1 exclusively for the game! “Our music supervisor, Duncan Smith, approached all labels/artists for multiple stems to enable us to dynamically pan them in real-time and up/downmix the soundtrack on-the-fly MAY 2017

depending on speaker setup, perfectly maintaining audio quality/content no matter the channel count.” Artists visited the Sony CSG Audio department in London and experienced how Couthier had grouped stems based on sonic characteristics so he could design sidechaining rules which only target musical elements potentially in conflict with specific sound and dialogue content. Good thinking! “A gameplay voice-over will apply sidechain to the music’s vocals. An explosion ducks transient-heavy music parts (like drums) leaving instrument levels untouched. Also, there’s a music sub stem which is ducked only when a sfx with sub-frequency content happens. This mix is all about very fast substitutions of parts between sfx and music, so only one element cuts through at a time. We have master ducking and fx, because if you only use the fast, surgical technique, the mix will sound clean but flat. Adding intentionally noticeable ducking makes it feel cool and dynamic.”

As well as music advancements, the team re-visited the sound to keep WipEout Omega Collection feeling fresh and futuristic, modernising some

elements, introducing new ones, and ditching others. “Every sound I identified as iconic (as a fan) is remastered,” said Couthier. “A combination of EQ, redesign/ re-synthesis, adding new layers to fill gaps in the spectrum, and increasing impact and dynamic range. Almost all other sounds have been totally redesigned with modern tools. We’ve added real-time parameters in code (such as altitude, acceleration, doppler) to better represent gameplay with audio.”

With PS4 developers encouraged to achieve an average loudness of -24 LUFS, Couthier knew he would have way more headroom compared with previous titles released during the ‘loudness war’: “The original games’ mixes were (as you’d expect) very flat, but the new standard allows much more dynamics.” One of the most significant aspects of the development was Couthier’s approach to detailed pre-production, developing an ‘audio vision’. “I analyzed every sound’s evolution over the 20-year franchise history, benchmarking with modern references and creating audio pre-vis using old footage. We only had four months’ production. So comprehensive, initial work really focused how to deliver the closest to my vision within the time.” ▪

The Long Way Round: This issue has an exclusive look at Italian developer Milestone and their big gamble on growth. We also have an eye on visual arts with a showcase of the best freelance artists in the industry, advice and how to present your portfolio from recruiters and an in-depth look in to the design of escape room puzzles.